Featured
articles
The miracles of Lourdes are inexplicable
Luc Montagnier who discovered the HIV virus, Nobel in Medicine and Agnostic, surrenders to Our Lady 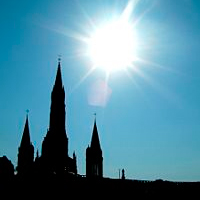 Danila Castelli is an Italian woman who was suffering from severe hypertension and who after visiting Lourdes in 1989 was completely healed. This case was the official miracle number 69 recognized by the Catholic Church in this Marian shrine since the appearance of the Virgin to the young Saint Bernadette in 1858.

Since then, more than 7,000 "unexplained" cures have been recorded in Lourdes, although only a few dozen have been considered miracles. And this is due to the rigorous conditions established for the study of these healings.
However, the debate about apparitions and healings in Lourdes has been taking place for decades and the mockery and criticism of the most belligerent atheists contrasts with the respect and consideration of renowned professionals in the face of a religious phenomenon that does not leave anyone indifferent.

This is the case of the Nobel Prize in Medicine and Prince of Asturias, Luc Montagnier. This French doctor is known to have discovered the HIV.
And it is very interesting to know the opinion of this renowned scientist and former director of the Pasteur Institute precisely on Lourdes, a place that requires great faith. This fact was credited in a book that included the dialogues between Montagnier and the Cistercian monk, Michel Niassaut, entitled Le Moine et le Nobel.
"No need to deny anything"

At one point in the conversation came to light the unexplained healings in Lourdes. What would a Nobel laureate of non-believer medicine think about this matter? His answer would be an example of coherence for the world of science. "When a phenomenon is inexplicable, if it exists, there is no need to deny anything", said Luc Montagnier bluntly. In this sense, the Nobel Prize in Medicine stated that "in the miracles of Lourdes there is something inexplicable".

Besides, Montagnier disfigured the behavior of some of his companions and said in this book that "many scientists make the mistake of rejecting what they do not understand, I do not like this attitude." I often quote this phrase from astrophysicist Carl Sagan: "the absence of proof It's not proof of absence".

"Miracles are inexplicable".
In this sense, he added that "as for the miracles of Lourdes that I studied, I think it is something inexplicable. I do not explain these miracles but I recognize that there are cures that are not included in the current state of the science".
As the discoverer of the HIV virus, Montagnier has had a very important relevance in the second half of the twentieth century and despite the traditional criticism of the anti-Catholic world for the Church's positioning in AIDS, this scientist praises the role of the world Catholic in the face of these dramas.

Collaboration with the Church...
He recounts that "with my American colleague Robert Gallo I got an audience with the Pope (John Paul II) on how we could increase our collaboration with shadow staff on Catholic missions in Africa. They treat people affected by AIDS and prevent the spread of the virus".
This important, and often forgotten work, is very much noted by this Nobel Prize. "Christian religious orders have played a very positive role in caring for the sick. I recognize that, in the field of hospital care, the Church has been a pioneer."

The Church's vital work against AIDS.
"I was able to see closely in my long years of AIDS research, especially at the beginning, everyday patients condemned to inevitable death. Often the faith and closeness of the Church helped them cope with the disease and not feel abandoned. It is through this experience that I have always recognized the Church's pioneering and invaluable contribution in the field of hospital care", said this French scientist.
The esteem of the Montagnier agnostic for the Church is great. He even volunteered and helped John Paul II slow the progression of Parkinson's suffering. In his view, if the values of Christianity prevailed in the world, the planet would gain much. "There are 2 billion Christians, of whom 1,100 are Catholics. Their good feelings are present" but they are not the ones who rule the world. May, he considers, love for his neighbor leads the world.

The relationship of another Nobel Laureate with Lourdes
However, Montagnier is not the only Nobel Laureate to have a relationship with Lourdes. Much deeper was that of Alexis Carrel, Nobel prize in medicine in 1912. His relationship with these healings even led him to conversion to Catholicism.
In 1903 Carrel was a young atheist doctor. A colleague who was to accompany as a doctor a group that was making a pilgrimage to Lourdes was unable to attend and asked him to replace him. He agreed to go to personally check the falsehood of the miracles attributed to that place. But there he attended one of them, a fact that changed his life.
He visited a dying woman because of tuberculosis. He observed and analyzed all the symptoms. I'd die soon. The miracle came before his eyes. He came out of the pools and everything was gone. This fact led to his conversion, which he narrated in a book that was a scandal for the dominant skeptical naturalism at the time in France.