Featured
articles
The Bible is not fiction
Recent discoveries confirm the historicity of the scriptures. 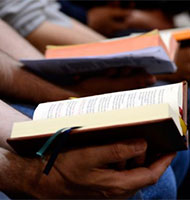 Israeli archaeologists have brought to light a seal in which appears the oldest mention of Bethlehem of those that have been found, 2700 years ago. "The Bible speaks of Bethlehem, now we have proof of this city than existed," said Eli Shukron, an archaeologist at the Israel Antiquities Authority. The stamp, which measures 1.5 cm. It has been found in the so-called City of David, a large archaeological area outside the walls of Jerusalem where it is believed that the king had built his palace. Vatican Insider has interviewed Simone Venturini, Biblicist, and writer, researcher of the Vatican Secret Archive and professor of Biblical Sciences at the Pontifical University of the Holy Cross. Is the author, among other things, of "The Secret Book of Jesus" (Newton Compton).

- Professor Venturini, what effects does this discovery have on the origin of Jesus' hometown?
"It is easy for anyone who is used to" deduce "the historicity of the Bible to find all possible arguments to say that this or the other city cited in the scriptures has never really existed. Especially in Italy, where the press always knows everything about Bethlehem or the Uefa Cup, but little or nothing about the book that is the basis of European civilization. It was, for example, the case of the city of Nazareth. Until a few years ago, there was no evidence of its existence before the third century AD. C. But in 2009, the archaeologist Yardenna Alexandre irrefutably demonstrated that she had found the remains of a modest house that dated back to the first century, the time of Jesus. The discovery that has taken place during the archaeological excavations in the area of ​​the Jerusalem National Park has the same importance. The seal, probably used to send the collection of taxes from the city of Bethlehem to the King of Judea, has been dated around 800-700 BC. The seal bears the inscription in the Hebrew language "l'shvat - bat-lechem – (l' mele) ch". In it appears the essential information to make the shipment to the king who ruled in the south, in Judea. For the first time, the name of the city of Bethlehem also appears outside the Bible. It is obvious that at this point it is difficult to doubt the existence around VI a. of the city in which Jesus was born, which instead existed at least eight hundred years before his birth".

- Meanwhile, archeology continues to confirm the historicity and acceptability of the Gospels and the Old Testament. A recent case is that of the team of archaeologists led by Professor Yosef Garfinkel, professor of the Institute of Archaeology at the Hebrew University of Jerusalem, who during archaeological excavations in Khirbel Qeiyafa, a city west of Jerusalem adjacent to the Elá Valley, they have discovered rich assemblies of pottery, stone, metal utensils and objects of worship. Besides, three large rooms have come to light, serving as shrines of worship. How does this discovery of new remains from the time of King David reinforce biblical historicity?
"This is a very recent archaeological discovery that has taken place around 30 kilometers southeast of Jerusalem. During the excavations of Khirbet Qeifyafa, "ruins of Qeiyafa",  the team of Professor Yosef Garfinkel of the Hebrew University of Jerusalem has unearthed remains that could revolutionize current studies on the Bible. In recent decades, many biblical strongly doubted that before the 8th century BC there was a truly organized and socially well-structured kingdom of Israel. The remains of Khirbet Qeiyafa, dating carbon 14 as corresponding to the period between the 10th century BC, instead demonstrate above any reasonable doubt that in the time of David and Solomon there were perfectly fortified and with a social structure, which was part of a solid and stable realm. Not just. The fact that no pig bones or sculpted images depicting deities have been found would further demonstrate that the origin of the monotheistic cult in Israel is much older than scholars are willing to admit. Finally, also laws imposing food rules (cf. Leviticus 11.7) would not be a late evolution of an older and less restrictive diet. In a word, the Bible, and included old will, is not always fiction".

- How does the description of these places correspond to the descriptions in the Bible that speak of the time of King David?
"Khirbet Qeiyafa's discoveries help us better understand the sophisticated architectural features of the Jerusalem Temple. Before Professor Garfinkel released the "models" of the shrines corresponding to 30 years before the construction of the Temple, we were forced to assume the physiognomy of the temple from the enigmatic description in the I Book of Kings (Chapter 6-7). Now, on the other hand, we know for example how their columns were and we know the peculiarities of some of their friezes. Even, thanks to the studies of Yardenna Alexandre, we can rebuild a house of Nazareth from the time of Jesus, one of those in which Jesus, Joseph, and Mary probably lived".

- Is archaeology "allied" or "enemy" of faith?
"Archaeology is an ally of faith, in the sense that it gives consistency to our relationship with God. It is not an idea that, at least for Catholic Christians, can be drawn from the fashions and demands of the moment. Faith in a unique God that is revealed to man has very ancient roots and reminds us that the Bible is essential to fully understand the mystery of man".