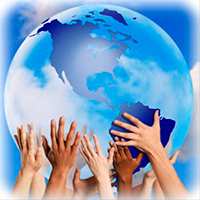 When the environment, the physical and the social, are not very transited by the reason of man, that only affects the biological life, but slightly in the spiritual...

These are the long moments of history when culture has served primarily so that man does not shipwreck in nature. Let us think of the discovery of fire, of the first utensils, in the beginnings of grazing and agriculture.

But in our time, when the reason of man soaks our world, through technique and the media, the culture created influences the whole man positively or negatively. Unless he creates his environment, cultivating his interiority (reading, reflection, prayer) and seeking the climate of a Christian group or, at least a true humanism. It is also for this task for which the Church needs the collaboration of Catholic intellectuals.

Man has clung for millennia to culture, so as not to perish in nature. Perhaps, for the first time in history, man must cling to religion so as not to be wrecked in a culture that has become an enemy to him.

For today's Christian is shipwrecked as such and as a mere man, when he immerses himself in today's culture indiscriminately: without judgment or criticism of it. That danger is especially great for our youth.

Man has always needed God to explain himself and the world and protect himself from the evils of God. Apart from its natural openness to God (Cosmo-biological reasons of religiosity).

A consciously religious man has always needed God to give life to the best in him: the possibility of sharing God's life (Mystical Reasons of Religiosity).

But now he knows an unprecedented experience. The world he builds and the very culture-technique of which it is used to do so turn against it if it dispenses with Dios.

We cannot separate the reflection of culture, from science. and of the technique, because these are a factor of history and therefore a factor of culture, and we cannot consider the current situation without paying attention to these two.

It should be emphasized that it is not only the technique that threatens man but the threat that arises from the ideological and philosophical culture plane. For more than a generation, theories have spread that demoralize human beings, in the etymological sense of the word. The conviction that man is a responsible, free being, owner of his moral conduct, capable of knowing the absolute and transcending, has been destroyed, especially in the younger ones. Hence the pastoral care of culture wants to be open to all kinds of knowledge.

The sciences deviate from their objective, if they stop pursuing the service of culture and, therefore, man. There is a crisis of the legitimacy of science. When he disconnects himself from the truth of man and the service of man, he risks turning against human beings.