Featured
articles
History, victors and vanquised
History on our planet is not the last word about who wins and who is defeated 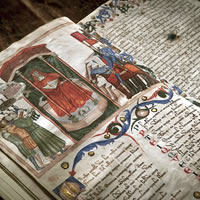 The struggle characterizes thousands of moments in human history. Two or more positions are counterposed. Some conquer, others lose.

For some, the result decides everything. The victors Exultan. Losers cry.

In reality, human time is not enough to assess who won and who really lost. For the one who triumphs with his injustices, has lost miserably as a human being, while the Innocent defeated has defeated thanks to his honesty.

If with the passing of the months and years the winners from injustice seem drunk with their triumph and the defeated innocents remain in their failure, it is necessary to assume that there will be something, out of time, that put things in place.

That leads to admitting that there exists a life and a judgment after death, a time that exceeds the limits of the time of history. Because a guilty "triumphant" in history cannot be left without punishment, nor does a bitter death deserve the innocent defeat.

Pope Benedict XVI offered this idea in his encyclical "Spe Salvi," with his gaze on a good God, in which justice, together with mercy, came to fullness.

As the world continues its frantic march, with revolutionaries and coup-killers who crush entire peoples, with apparent democracies that legalize the death of helpless children before birth or unfair dismissal of thousands of workers, it gives solace to wait in the definitive triumph of good.

History on our planet is not the last word about who wins and who is defeated. Only what begins in the hereafter allows us to identify that it completely failed who died in injustice, and that it triumphed forever that he lived for love and knew how to embrace mercy by forgiving and begging for forgiveness.