Featured
articles
Help after a mistake
In the face of our mistakes, the father offers his son again as a sign of infinite patience, of a saving aid. 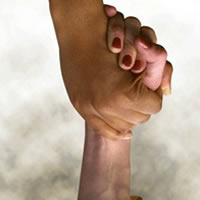 It seems like something almost inevitable: making mistakes. Small, almost imperceptible errors. Large errors, which cause pain in oneself and others.

When the mistake is made public, there are those who attack, like hyenas, the culprit. The mistake made becomes a sort of trophy: the sentences are ruthless, even cruel.

Thank God, there are also hands and hearts that come to the aid of those who have been mistaken. They understand their shame, they recognize their need for understanding.

Before so many condemners, who point their finger at others and mercilessly insult those who have made grave mistakes, it is comfort to find friendly hands and looks of mercy.

Societies are full of wounds. Hatreds and rages dominate in many humans. Just read some comments on the Internet. In the face of so much unhealthy anger, we need a wave of forgiveness, listening, help.

That wave began with Christ's coming into the world. He was immediately perceived by hundreds of sinners who came to listen and see the master. It was confirmed by his disciples, who were also wounded by sin.

That is why, when Peter, after his three denials, crossed his gaze with that of Christ, he once again felt what he had seen so many times: understanding, closeness, mercy.

In the face of our mistakes and sins, the father offers his son again as a sign of infinite patience, an inexhaustible forgiveness, a saving aid.

For this reason, we too, in the face of the mistakes we see in others, can apply the great teaching of the Gospel: "Do not judge and you will not be judged, not condemn and you shall not be condemned; Forgive and you will be forgiven. And you will be given... " (Lc 6.37 38).