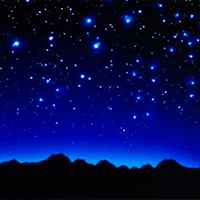 In one of his catecheses on baptism, explained: "See that also of the earth are born stars, stars more glittering than the sky. Stars upon the Earth, because of him who appeared on the Earth Come from Heaven "(seventh baptismal catechesis).

The comparison came much farther, for Crisóstomo was convinced that the baptized shine better than the stars, because their light is visible in full daylight.

"but not only stars on the Earth, but also stars in broad daylight. Second prodigy! Stars in full day more glittering than the night! These, indeed, are hidden when the sun appears, those, on the other hand, when the sun of justice appears, they shine even more "

In the same baptismal Catechesis St. John Crisóstomo quoted the words of Christ: as the stars of Heaven Fall One day (cf. Mt 24.29), "The righteous will shine like the sun in the kingdom of their father" (Mt 13.43).

The metaphor is daring, more in a world where many no longer know how to look at the sky to see the stars, and many others do not perceive the beauty of the baptism that Jesus Christ has left us.

So we can ask ourselves if we shine as the master asks: "Shine your Light in front of men so that they may see your good works and glorify your father who is in Heaven" (Mt 5.16).

We are children of a light that does not die, that came into the world and is offered to every man (cf. Jn 1). If we allow baptism to shine in our minds and in our hearts, we will be stars on Earth. Then our testimony will be overwhelming, because it comes from the heart