Featured
articles
Easter: 50 days to sing Hallelujah!
The cry that invites again and again to praise and give thanks to the Lord, because his mercy is eternal. 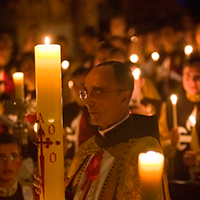 At night, a faltering flame. The priest and the people lit their candles. The light expanded. Darkness recedes. The procession moved towards the altar. The church was filled with radiance. The church celebrates Easter.

Easter vigil has a magical charm. It presents the most important event in human history: Christ has risen and lives forever.

The world, apparently, continues its march, monotonous or enthusiastic, between joys and sorrows. But the one who lets himself be touched by the great news knows that death has been defeated, that sin is not the last word in history, that forgiveness has cancelled the sentence.

We know from the Gospels that Christ appeared to his followers for 40 days and then ascended into heaven. After 10 days, the first disciples received the Holy Spirit.

The Church celebrates this event with 50 days of celebration, of song, of Hope. It is the time of the "Hallelujah", of the cry that invites again and again to praise and give thanks to the Lord, "because his mercy is eternal".

Pope Benedict XVI explained it with these words: "The third great symbol of the Easter Vigil is of a singular nature, and it concerns the man himself, it is the singing of the new song, the alleluia". When a man experiences great joy, he cannot keep it for himself. He needs to transmit it, but what happens when man is reached by the light of the resurrection and, in this way, comes into contact with life itself, with truth and with love? Simply, that it is not enough to talk about it, to speak is not enough, it has to sing "(Vigilia Pascual, April 11, 2009).
We have before us 50 days of Hallelujah. It is the Passover, the pass, the victory of the Lord. From the heart, from the hope that illuminates all human life, happy Easter!