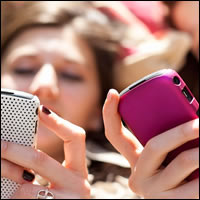 The Ramón Pané Foundation presented on Wednesday 17th at the Pontifical Council for Social Communications, the new mobile application (APP) called "Cristonautas 1", which wants to be concrete support for the World Day of the Youth of Rio.

According to the note sent by the charitable organization, Archbishop Claudio María Celli, president of the PCCS "received this application enthusiastically, because he has always insisted on the use of these current communication routes to be able to reach everyone, especially those that are connected through their smartphones, tablets and the Internet".

For his part, Brother Ricardo Grzona, director of the Ramon Pané Foundation, who presented the application to the Vatican Dicastery, stated that this "had been required by young people, for their guidance in the prayerful reading of the Bible (Lectio Divina)".
Cristonautas 1(with that name searched in Apple store and Google play) is available online to download on smartphones and tablets with the Android platform, the same as on Iphones and Ipads. It is free, thanks to the efforts of the Pané Foundation and the generosity of other donors.
Carrying the Bible with you
The app Cristonautas is based on a synthesis of the History of Salvation prepared by the priest Hernan Pereda Bullrich and presents all the books of the Bible in their historical context. The novelty is that several exercises of Lectio Divina have been included, especially in vocational issues.

Because the main recipients are young people, this program will allow them to give them spiritual support for vocational reflection, as well as for the work of catechists and pastoral workers in general.

One of the reasons that led the Pané Foundation to undertake this effort was because young people better understand the message of the gospel if spoken to in their languages, in their means, in their environments, in their forms and styles. T

here is also a version for computers (PC and Mac), which can be requested for use in schools and/or parishes through the website of the Foundation. The APP Cristonautas 1 is in Spanish, and will soon be offered in Portuguese and English.