Featured
articles
Keys to promoting peace
Peace cannot be based on a false rhetoric of words, nor can we speak legitimately of peace, where the solid foundations of peace are not recognized and not respected. 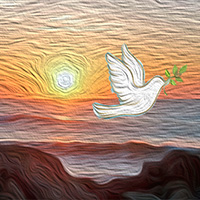 ROME, Saturday, 15 January 2005 (ZENIT.org).-Next to the Feast of Mary, Mother of God, the Church begins the new Year with the World Day of Peace on January 1. This is a recent tradition, begun by Pope Paul VI in 1968.

In his message for the first celebration of this day, Paul VI explained that he hoped that a day dedicated to peace would not be "exclusively religious, i.e. Catholic; I would like to find the accession of all the friends of peace, as if it were the own initiative of each one of them, and expressed in various forms, corresponding to the particular character of those who warn how beautiful and important is the harmony of all voices in the world for the exaltation of this first good, which is peace, in the multiple concert of modern humanity. "

At the same time, the Pope warned against a superficial stance for peace, which does not seek to resolve the problems underlying the conflict.

"Peace cannot be based on a false rhetoric of words", he said. "Neither can legitimately speak of peace, where the solid foundations of peace are not recognized and not respected: sincerity, that is, justice and love in relations between States and, in the field of each of the nations, of the citizens with each other and with their rulers; the freedom of individuals and peoples, in all their civic, cultural, moral and religious expressions".

Paul VI also explained that the spiritual foundation of peace arises from Christ. "Through his sacrifice on the cross, he made universal reconciliation and we, his followers, are called to be the operators of peace."

Integral part of the mission

The Church's contribution to promoting peace is one of the topics discussed in the recently published compendium of the Church's Social Doctrine. Quoting John Paul II, the text explains: "The promotion of peace in the world is an integral part of the Church's mission to continue the work of Christ's redemption on Earth" (number 516).

To promote "true peace", the compendium continues, "is an expression of the Christian faith in the love that God has for every human being." But a true peace «is made possible only through forgiveness and reconciliation» (number 517). This process of forgiveness after having suffered violence is not an easy task, but it is not impossible either.

But forgiveness, adds the text, does not mean to put aside the search for justice, nor does it imply blocking the way to the truth. Thus the compendium supports the work of the international tribunals and the legal processes that help to establish the truth about crimes committed in times of violence.

The courts are not enough, though. "It is through prayer that the Church is in the battle for peace" (number 519). Prayer not only opens hearts to God, but also to an encounter with others marked by respect, understanding, esteem and love. At a particularly appropriate time this year dedicated to the Eucharist, the compendium explains that the mass "is an authentic spring of goods for all authentic Christian commitment to peace."

The compendium also contains a brief explanation of the biblical aspects of peace. "The Lord is Peace" establishes the book of judges, in 6:24. And, citing Genesis, the text notes that creation aspires to peace.

But peace is not a mere kind of bucolic tranquility. It arises from the relationship between each human being and God, explains the number 488. This relationship should be founded on righteousness, but it has suffered because of original sin and since then violence, and separation from God, have entered the world.

Peace is also much more than the mere absence of war. It represents the fullness of life (number 489). Peace is not something that is entirely due to human endeavors, but it is a gift from God that takes place when we obey his divine plan.

Peace also has a messianic element, when a new world of peace embraces the whole of nature. After all, according to the Book of Isaiah, the Messiah is called the "Prince of Peace." In fact, the promise of peace runs through the entire Old Testament, finding fulfillment in the person of Jesus. He has brought down the wall of hostility between people and reconciled them with God. And before the sacrifice of Calvary, Jesus spoke to his disciples of unifying love with the Father, who hoped to confer upon them.

"The words of the risen Lord will not be different; every time he meets his disciples, they receive from him the greeting and the gift of peace» (number 491).

"Working for peace can never be separate from the announcement of the Gospel, which is in fact the 'good news of peace' addressed to all men and women" (number 493). And at the center of this Gospel of peace is Christ crucified, who has surpassed divisions and brought salvation from the resurrection to all.

Moving on to the social implications of the quest for peace, the compendium explains that it is necessary to be founded on a correct conception of the human person and requires that a social order be established based on charity and Justice.

It is necessary to understand the idea of peace as the fruit of justice in the sense of respect for the balance of each of the dimensions of the human person. This peace is threatened when human dignity is not respected and civil life is not directed towards the attainment of the common good. Love is also necessary, because, while justice removes obstacles, the positive construction of peace is the result of love.

This construction of peace requires a constant effort every day. The compendium adds that to achieve it everyone must realize that they are responsible for their promotion. "To prevent conflict and violence, it is absolutely necessary that peace begin to take root as a value deeply rooted in each person's heart."

In this way the promotion of peace will be extended from individuals to families and groups within society, until it reaches all levels of the political community. The compendium also calls for personal testimony in favor of peace for those who renounce violence.

Together with the presentation of the traditional doctrine of the Church on self-defence, the compendium also dedicates some sections to condemning war, violence and terrorism, making it clear that its use only leads to more, even more complex, conflicts. It also calls for the regulation of arms trade and condemns the use of child soldiers.

It briefly mentions a more recent issue in international conflicts, the use of sanctions. The compendium, in number 507, calls for careful use and weighing down its effects on the civilian population. Economic sanctions should be "used with great discernment and must be subject to strict legal and ethical criteria".

In his message of 1968, Paul VI said: "It is necessary to educate the world to love peace, to build it and to defend it". An intention for the New Year that everyone can support.