Featured
articles
Dusting lessons
It's never too late to give the helm to God. 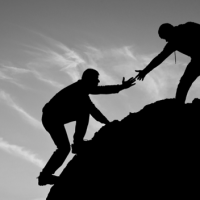 In the XIX century, the world seemed to spin faster. Leaving behind the so-called "century of lights," there were reasons to be "positive" about the horizons presented to humanity: the numerous scientific advances, the evolution of medicine, the growth of cities, made it appear that within little man could do without God.

And now, two centuries later, one can look back and reflect to learn from the past. Perhaps the million-dollar question is: are we better off than before? If we look superficially through our window we will say yes: there are bigger houses, better homes, more medicine, greater consumption, an increase in goods, more means of communication and more scope...

But if we move from the surface to the bottom we will crash with a paradox, because, although there are larger houses and better homes, there are also more broken homes and small families.

More medicine and more consumption? Yes, but less well-being and emptier. And if goods and telecommunications have increased, it has been at the expense of the values and leaving a balance of fewer human relations, less communication.

We have reached outer space, but we hardly dare to cross the street. Isn't it necessary to have a common thread that gives meaning to so much aimless progress?

In terms of health, we sacrifice it so that we can increase our capital a little more, to have promising savings that sustain us in old age only and then invest them in trying to recover it.

Nietzsche already said it in "The Gay Science" by feeling the emptiness of man running without a goal: "Is there still a top and a bottom? Don't we miss through absolute nothingness? Doesn't the emptiness haunt us with his breath? Isn't it colder? Don't you see the darkest night coming all the time?"

Those paradoxes, which swarm in our cities and that we stumble on every corner, have their origin in ourselves as individual beings.

How many times the present drains from our hands thinking of futures that may never come or yearn for past that they won't come back!

It's up to us if we repeat the mistakes of the past if we make them customs. There is not the problem in the path we travel, but on the axis around which we orbit. We have put our particular interests there, the ephemeral, the urgent and not the important.

It's never too late to give the helm to God. It is curious that when death is perceived close, we focus on what is important. Well, what's important at the time of death is important now, too