Featured
articles
Chespirito: Media Disposal or Social Awareness?
He sought to touch the sensibility of our hearts to make us enter the heart of a poor child 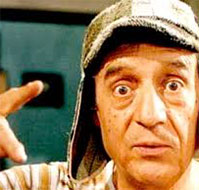 On November 28, 2014 died, at the age of 85 years, the great Mexican comedian Roberto Gómez Bolaños "Chespirito". Someone who has made us laugh for several years thanks to the ingenuity of their characters. However, and from the recent events that we live in Mexico (the repression of students who demand justice, the cynicism and corruption of the Mexican political class, etc.) a question comes to my mind insistently when writing these lines, which have had as an initial motive to pay homage to the pure white humor of Chespirito: his characters have really benefited the Mexican population or have been, on the contrary, distracting elements of media alienation?

Roberto Gómez Bolaños worked all his life for Televisa, one of the companies that has caused the most damage culturally to the Mexican population. In his characters we do not see a social report "explicit". Someone might object that this is not the task of the comedians, because with the fact of having fun they do their homework. And yet there are comedians who have made very subtle criticisms and even open to the political systems that had to live, I think of the great Charles Chaplin.

What do you think about Chespirito and your social commitment? I think that in his characters we find a very subtle critique of the Mexican reality that may not be seen immediately, but that is present in his work. El Chavo del 8 is a poor child who lives in a barrel, who has no family and only dreams of being able to eat a cake. A Mexican child, like so many others, who seeks to survive in the midst of poverty and who has only his innocence and tenderness. They spent years and years of programming and their misery situation never improved, unlike the telenovelas de Televisa where the poor girl ends up being rich. Didn't we find a subtle critique of the system here? I think so. He is a child who does not understand politics or economics but is not allowed to be poisoned by the external world (violence, bad words, bad humor, etc.). He has his barrel, his inner world full of dreams and purity.

Chespirito, unlike most Mexican pseudo-comedians, did not treat us as “nacos”, did not use gudgeon and half-naked women to distract us stupidly. He sought to touch the sensitivity of our hearts to try to make us enter the heart of a poor child excluded from society. On the other hand, the Chapulín Colorado is not the handsome, strong and intelligent hero of Hollywood, but a small "hero", something clumsy and naive who has as his only weapon his desire to help and his “chipote chillón”.

It seems to me that Roberto Gómez Bolaños ' message of social vindication was to make us see the world from below, from the poor and excluded from the system. From the one who has not eaten, who has no home and who is hungry, but who nevertheless is not allowed to be infected by human wickedness. Is this enough to change a society? Of course not. Much more is missing. Humor becomes perverse when the other is ridiculed and when humiliated, but when we are sensitized to the misery of others is a truly human humor. It seems to Me that the purpose of Roberto Gómez Bolaños' white humor was to make us love his characters despite their weaknesses and shortcomings. A humor that should lead us not only to laugh a few moments, but to find that there are no more children who live in the streets in subhuman conditions of misery.

Rest in peace Roberto, and that the humor that you have given us also propitiates in us the desire of a more just society.