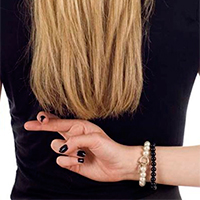 Now or never. All or nothing He's an irresponsible or a thief. Save the child or mother. We do it like this or nothing will ever be achieved. There is no turn of the page: we accept this proposal or failure will be inevitable.

Dilemmas, disjunctions or dichotomies such as the previous ones continually appear in the debates. In dialogues or in the media, sharp phrases such as those exemplified, said for sure, impress.

The message seems clear: there are two alternatives, and only one can be true (or good, or both at once), usually the one who wants to defend the one who uses (sometimes abuses) in this way of speaking.

Whoever offers such blunt statements, one of two (two alternatives, again): either knows what he says, or manipulates. Well, no: things aren't that simple.

Because between now and he never exists (expect) tomorrow, or next month, or many other possibilities. Because between the whole and nothing it is possible to find an intermediate formula in many situations of life. Because one may not be irresponsible or a thief, but simply a victim of slander, or the economic crisis brought to disaster the company he ran. Because in many cases it is possible to save both the son and the mother. And because things can be done in more ways than we initially thought.

Even the dichotomy about those who speak like that (or know or manipulate) is also false: maybe they don't think things through before they say them, or they repeat what they've heard from others, or they don't know but they don't manipulate either: they're just wrong, in good faith, or in bad faith or... The alternatives are more numerous than we imagined.

The world we live in is complex. Therefore, in many cases the most correct attitude is to recognize what we do not know and avoid misleading simplifications and dichotomies. We may then not be as incisive as false dichotomies seem to be, but at least we will have the mind and heart more open to reality, avoid summary convictions against innocents, or acquit guilty men who know how to deceive cunningly with his manipulative skill.

So, dichotomies yes or dichotomies don't? Better, not to fall into a new false dilemma, it is best to adopt that healthy-prudent attitude of those who avoid hasty judgments and know how to investigate, with serenity, the past, the present, and what can be said about a future full of mysteries and open to possibilities almost infinite.