Featured
articles
The Social Message of The Church
Fragment of the document produced by the Cardinal François-Xavier Nguyên Van Thuân, President of the Pontifical Council for Justice and Peace. It belongs to article one: The nature of the social teaching of the Church of the Compendium of Social Doctrine 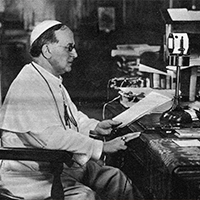 15. The social concern of the Church, aimed at the authentic development of man and society, which respects and promotes in all its dimensions the human person, has always been expressed in a very diverse way. One of the leading means of intervention has been, in recent times, the Magisterium of the Roman Pontiffs, who, from the encyclical Rerum Novarum of Leo XIII as a reference point, has frequently dealt with the issue, sometimes coinciding with the dates of publication of the various social documents with the anniversaries of that first document. The High Pontiffs have not ceased to illuminate with such interventions also new aspects of the Social doctrine of the Church. Therefore, from the invaluable contribution of Leo XIII, enriched by the successive contributions of the Magisterium, a renewed doctrinal "corpus" has been formed, which is articulated as the Church, in the fullness of the word revealed by Jesus Christ (Dei Verbum, N. 4) and through the assistance of the Holy Spirit (cf. Jn 14, 16, 26, 16, 13-15), reads the facts as they unfold in the course of history. It tries to guide in this way the men so that they themselves give an answer, with the help of the reason and of the human sciences, to their vocation of constructors responsible for the earthly society.

16. In the middle of the perturbations and uncertainty of the present hour, the Church has a specific message to proclaim, has to provide support to men in their efforts to take in their hands and orient their future. From the time that the Rerum Novarum denounced clearly and categorically the scandal of the situation of the workers within the nascent industrial society, historical evolution has become aware, as testified by the Quadragesimo Anno and the Mater et Magistra of other dimensions and other applications of social justice. The recent ecumenical Council has tried, for its part, to make them manifest, particularly in the pastoral constitution Gaudium et Spes. We already continued these guidelines with our encyclical Populorum Progressio: "Today the most important fact, we said, that each one must realize, is that the social issue has acquired global proportions" (PP, N. 3). A renewed awareness of the demands of the evangelical message imposes on the Church the duty to put themselves at the service of men to help them understand all the dimensions of this serious problem and to convince them of the urgency of a solidarity action in this shift in the history of mankind. This duty, of which we have an alive conscience, obliges us today to propose some reflections and suggestions promoted by the breadth of the problems posed to the contemporary world.

17. "Christian revelation... leads us to a deeper understanding of the laws of social life" (GS, N. 23). The Church receives from the Gospel the full revelation of the truth of man. When it fulfils its mission of announcing the Gospel, it teaches man, in the name of Christ, his own dignity and his vocation to the communion of people; and it discovers the demands of justice and peace, according to divine wisdom.

18. The social doctrine of the Church, which proposes a series of principles for reflection, criteria for judgement and guidelines for action, is primarily focused on the members of the Church. It is essential that the faithful interested in human promotion have a firm knowledge of this valuable set of teachings and make it an integral part of their evangelizing mission.... Christian leaders in the Church and in society, and especially laic men and women with responsibilities in public life, need to be properly instructed in this teaching so that they can inspire and vivify civil society and its structures with the yeast of the Gospel.

19. The doctrinal formation of the laic faithful is now becoming increasingly urgent, not only for the natural dynamism of deepening their faith, but also for the demand to "give reason for the hope" in them, in front of the world and its serious and complex problems. In particular, it is absolutely indispensable especially for the laic faithful engaged in various ways in the social and political field-a more exact knowledge of the social doctrine of the Church, as repeatedly the synod Fathers have requested in their interventions.

20. Faithful to the teachings and the example of his divine Founder, who gave as a sign of his mission the announcement of the good news to the poor (Lk 7, 22), the Church has never ceased to promote the human elevation of peoples, to which it carried faith in Jesus Christ.

21. The Church shares with the men of our time this deep and ardent desire for a righteous life under all aspects and does not refrain even from submitting to reflection the various aspects of justice, as required by the lives of men and societies. Proof of this is the field of Catholic social doctrine widely developed in the arc of the last century, following the footsteps of such teaching comes the education and formation of the human sciences in the spirit of justice, as well as the concrete initiatives, especially in the area of the apostolate of the laic, which are developed in this sense.

22. If, as we have said, the Church fulfills the will of God, it will obtain a great supply of energy for itself, and also illuminate the idea of directing this energy to the service of men. It realizes clearly the Mission received from God, a message that must be disseminated everywhere. This is the source of our evangelical task, our mandate to teach all nations and our apostolic intrepidity to strive to achieve the eternal salvation of all men.

23. Certainly, there is no single model of political and economic organization of human freedom, since different cultures and diverse historical experiences give rise, in a free and responsible society, to different institutional forms.

(Address to the General Assembly of the United Nations Organization, 1995, N. 3)

24. Social doctrine, on the other hand, has an important interdisciplinary dimension. In order to incarnate increasingly, in different and constantly changing social economic and political contexts, the only truth about man, this doctrine enters into dialogue with the various disciplines that deal with man, incorporates his contributions and it helps to open up to wider horizons in the service of each person, known and loved in the fullness of his vocation. Together with the interdisciplinary dimension, we must also remember the practical and, in a certain sense, experimental dimension of this doctrine. She stands at the crossroads of life and Christian consciousness with the world's situations and manifests itself in the efforts of individuals, families, cultural and social cooperators, politicians and men of State to shape and implement them in history.