Featured
articles
Keys to Humanize Work
The Social Doctrine of the Church illuminates the meaning of work, capital, worker's rights and its global dimension. 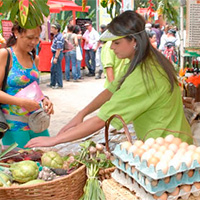 The Compendium of the Social Doctrine of the recently published Church dedicates a chapter to human work, and tries to explain its deeper meaning.

Headlining the chapter is an explanation of what the Bible has said about work. In Genesis, God entrusts man with the task of exercising dominion over creation. "Work is part of the original state of man and precedes his fall; it is thus not a punishment or a curse”, observes the compendium (No. 256).

Work has been associated with pain and effort as a result of original sin. However, it should be regarded as worthy of merit because it allows us to provide the material elements that we need, the compendium insists.

At the same time, the compendium warns against putting the work at the apex of our activities. "Work is essential, but it is God and not the work who is at the origin of life and the ultimate goal of man" (No. 257). In this context the establishment of Sabbath break is important, because it gives the opportunity to refocus on God.

In the New Testament, one finds the example of Jesus, who carried out the task of manual labor as a carpenter. Jesus denigrates the servant who hides his talent on the ground and describes his own mission as that of working (John 5:17). But Jesus also teaches us to look for the treasures of heaven that last, rather than those that are perishable (Mark 6:19-21).

Jesus later reveals that work is not only participation in creation, but also in the work of redemption. "Those who tolerate the difficult rigors of work in union with Jesus cooperate, in a certain sense, with the Son of God in their work of redemption and show that they are disciples of Christ who carry their cross" (No. 263).

In fact, as Saint Paul teaches, no Christian has the right not to work and live at the expense of others (2 Thessalonians 3:6-12). The Apostle Paul encourages Christians to work and then to share the fruits with others who are in need.

The compendium tries to deepen what the work means for each person. It has both an objective and subjective dimension. Its objective meaning refers to the area of activities, instruments and technologies used to produce things. While the subjective sense is related to work as being the activity of the human person, who performs the work as part of a personal vocation. "As a person, man is therefore the subject of work" (No. 270).

This subjective aspect of work is vital to a correct understanding of its value and dignity. The work is not simply the production of a commodity, but also the activity of a human person whose dignity must be respected. The compendium adds that the subjective dimension should take precedence over the objective aspects, "because it is the dimension of the person itself that is implied in the work, determining its quality and consummating its value" (No. 271).

Human work also has a social dimension, as an individual activity that connects with other people. "The fruits of the work offer occasions for exchange, relationship and encounter" (No. 273).

When it comes to the topic of understanding the relationship between workers and the material elements of production (capital), the compendium repeats the importance of preserving the concept of work in the first place as a subjective or personal task. Indeed, in the modern economy, the text notes that there is growing recognition of the value of “human capital” as an important resource in production.

But, while maintaining the principle of the priority of the human person, work and capital should exist in a relationship of complementarity, adds the compendium. Each one needs the other and it would be wrong to exalt one and forget the other's contribution.

To this end, the compendium encourages cooperation between work and capital through means such as participation in management, ownership and benefits. This can be easier in today's world, as human knowledge is a very important factor in the economy.

Regarding the collaboration between work and capital, the text defends the right to private property, but also draws attention to the importance of putting it at the service of all. Both private and public property, "must be oriented towards an economy of service to humanity" (No. 283).

A section of the compendium is devoted to explaining the rights in the area of human labor. To begin with, "work is a fundamental right and a good for all humanity" (No. 287). Work is needed to carry on a family and unemployment brings with it many social problems. Achieving full employment is therefore still a key economic objective. An important means to carry out this is to provide adequate education, to continue throughout the working life, so that people can find a suitable job.

The state has a role to play in this, but the compendium is careful to establish that this does not mean that governments should directly employ people to provide everyone with a job. The state's duty is to encourage economic activity by creating the conditions that will lead to adequate employment opportunities.

With the growing globalization of the economy, the compendium also recommends that governments cooperate with each other to safeguard the right to work and mitigate the ups and downs of the economic cycle. Another responsibility is to take care of the family. Businesses, unions, and the state should promote policies that support the family.

Other topics covered in this section are dealt with in issues such as women and children, the protection of migrants and agricultural workers. Women's rights should be respected and discrimination against them is not acceptable, especially in terms of salaries and social security. Child labor, the text continues, "constitutes a kind of violence that is less obvious than another, but it is not for this reason less terrible" (No. 296). Although it is true that in some countries the income earned by children is important to families, however this exploitation constitutes a serious violation of human dignity.

When it comes to unraveling more specific rights, such as just salary, the compendium recalls that "workers' rights, like all other rights, are based on the nature of the human person and on his transcendent dignity" (No. 301).

Go to the global

The last part of the work chapter deals with some recent developments in the world of work. Globalization has brought with it many changes, and it is important to remember that together with this process the world also needs "a globalization of safeguards, an essential minimum of law and equity" (No. 310).

An economy built not already on an industrial base but on the services and the most innovative technologies brings with it many changes for those who work, and some difficult adjustments. To deal with them the compendium recommends avoiding the mistake of insisting that changes occur in a certain way. "The decisive factor and the reference of this complex phase of change is once again the human person, who must remain the true protagonist of his work" (No. 317). Humanizing work, now on a planetary scale, is the next goal.