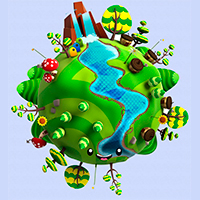 The new Compendium of Social Doctrine of the Church dedicates an entire chapter to environmental issues, recognizing its growing importance. The first numbers encourage Christians to consider the environment with a positive attitude, to avoid a mentality of contempt and condemnation, and to recognize the presence of God in nature.

We should see the future with hope, recommends the Compendium, "sustained by the promise and commitment that God continually renews" (No. 451). In the Old Testament we see how Israel lived its faith in an environment that was seen as God's gift. Moreover, "nature, the work of God's creative action, is not a dangerous adversary."

The Compendium also invites you to remember the beginning of the book of Genesis, in which man is put as the pinnacle of all beings and God trusts him to take care of all creation. "Man's relationship with the world is a constituent part of his human identity. This relationship is in turn the result of another even deeper relationship with God” (No. 452).

In the New Testament Jesus makes use of the natural elements in some of his miracles and reminds the disciples of his father's Providence. Then, in his death and Resurrection, "Jesus inaugurates a New World in which everything is subdued and recreates the relations of order and harmony that sin had destroyed" (No. 454).

Vatican Council II recognized the progress made by science and technology by extending our control over the created world. Improving our lives in this way is in accordance with the will of God, concluded the conciliatory fathers. They also observed that the Church does not oppose scientific progress, which is a part of God given human creativity.

But, the compendium adds, "a central point of all scientific and technological use is respect for men and women, which must also be accompanied by the necessary attitude of respect for all living creatures" (No. 459). Therefore, our use of the earth should not be arbitrary and it must be inspired by a spirit of cooperation with God.

Forgetting this is usually the cause of actions that harm the environment. To reduce the nature to "mechanistic terms", is often accompanied by the false idea that its resources are unlimited, leading to consider the development in a purely material dimension, in which it is given the first place "in doing and having instead of being" (No. 462).

If we need to avoid the mistake of reducing nature to merely utilitarian terms, according to which it is only something to be exploited, we also need to avoid going to the other extreme by making it an absolute value. An ecocentric or bio-centric vision of the environment falls into the error of putting all living beings at the same level, ignoring the qualitative difference between human beings, based on their dignity of human people, and other creatures.

The key to avoiding such mistakes is to maintain a transcendent vision. Acting in a more responsible way towards the environment is easier when we remember the role of God in creation, explains the Compendium. Christian culture considers creatures as a gift from God, which must be cared for and safeguarded. The care of the environment also falls within the responsibility of securing the common good, whereby the creation is destined to all. The Compendium also notes that we have a responsibility to future generations.

A section of the chapter focuses on the issue of biotechnology. The new possibilities offered by these techniques are a source of hope, but they have also raised hostility and alarm. As a rule, look at the text, the Christian vision of creation accepts human intervention, because nature is not a sort of sacred object that we should leave alone.

But nature is also a gift to use responsibly and, therefore, modifying the properties of living beings must be accompanied by a careful assessment of the benefits and risks of such actions. Moreover, biotechnology must be guided by the same ethical criteria that should guide our actions in the areas of social and political action. And the duties of justice and solidarity must also be taken into account.

In terms of solidarity, the Compendium calls for "equitable trade exchanges, without the burden of unfair stipulations" (No. 475). In this sense it is important to help nations achieve certain autonomy in science and technology, transferring the knowledge that will help them in the development process. Solidarity also means that, together with biotechnology, favorable trade policies are needed to improve food and health.

The Compendium also mentions to scientists that, being called to work in an intelligent and persevering way to solve food and health supply problems, they should also remember that they are working with objects that are part of the world heritage site.

To entrepreneurs and public agencies in the biotechnology sector, the text reminds them that, together with the concern for a legitimate benefit, they should bear in mind the common good. This is especially true in the poorest countries, and when it comes to safeguarding the ecosystem.

A section of the chapter is dedicated to the question of sharing the resources of the earth. God has created the goods of the earth to be used by all, observes the Compendium, and "they must be shared equitably, according to justice and charity" (No. 481). In fact, international cooperation on ecological issues is necessary, since they are usually problems on a global scale.

Ecological problems are often connected with poverty, with poor people unable to tackle problems such as the erosion of farmland, owing to their economic and technological constraints. And many poor people live in urban suburbs, afflicted by pollution. "In such cases, hunger and poverty make it virtually impossible to avoid intensive and excessive exploitation of the environment" (No. 482).

The answer to these problems is not, however, population control policies that do not respect the dignity of the human person. The Compendium argues that demographic growth is "fully compatible with comprehensive and shared development" (No. 483). Development should be comprehensive, the text continues, ensuring the real good of people.

In relation to natural resources we must consider the universal destiny of the goods, and particularly when it comes to the issue of water. Inadequate access to drinking water affects a large number of people and tends to be a source of disease and death.

For the developed world, the Compendium offers some notes on the appropriate lifestyles. At the individual and community level, the virtues of sobriety, temperance and self-discipline are recommended. We need to break with the mentality based on mere consumption, in addition to being aware of the ecological consequences of our choices, the text holds.

The Compendium concludes its chapter by asking that our action towards creation be characterizeded by gratitude and appreciation. We should also remember that the world reveals the mystery of God that created and sustains it. Rediscovering this profound meaning of nature not only helps us to discover God, but is also the key to acting responsibly for the environment.