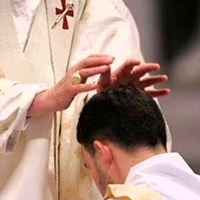 As to Orders. The supreme task which Christ had to fulfill was his priestly work of atonement which he completed as mediator between God and man. By the union in himself of humanity and divinity Christ is by nature the mediator. As a man from among men, Christ is our mediator with the Father; yet he is also capable of offering a worthy sacrifice to God because, by virtue of the union of his human nature with the Second Person of the Godhead, his human actions have in infinite value. In this fullest sense, the priesthood belongs to Christ alone.

But if Christ wished to live on and continue his work in the Church, the first thing he had to do was to provide for the continuance of his sacerdotal and mediatory function. Above all, if Christ wished to renew the sacrifice of the Cross throughout the ages and all over the world as the sacrifice of the New Law in the Holy Mass, he had to allow other men to share in his priesthood. For if there is to be a true sacrifice, there must be a priesthood ordained and authorized by God from whose hands God will accept the sacrifice.

All attacks on the priesthood of the Catholic Church thus go back to denial that the Holy Mass is a true sacrifice, entrusted by Christ to his Church, and ultimately to denial of any visible Church to which Christ entrusted his work as mediator and redeemer. So the attacks of Wycliffe, the Reformers and the "liberal" historians regarded the setting up of an official priesthood as the result of the evolution of Christian life in the early Christian communities.

The priesthood is ordained in the first place for the offering of sacrifice and therefore for the solemnization of the Church's formal worship. The arrangements for these celebrations demand also a corresponding ministry and thus graded ministers to the altar. This grading of the ministry goes in part back to direct institution by Christ, but in part was introduced by the Church.

The degrees of order - the four minor and three major orders with the highest of all, that of Bishop - signify an order of rank in the mediation of grace. It must be distinguished from the other order of rank which concerns jurisdiction, magisterium and pastorate. The latter are not essentially linked with the powers of mediation of grace, but in the concrete order established by God there are close relationships between the two kinds of power. For example, the fact that the power of forgiving sins exists in the Church does not, in itself, say anything about who has this power. But in the divine order, only a priest can have it.

Besides the conflict about the fact of the sacrament of order, its institution by Christ and its hierarchical structure, it has always been a principal concern of the Church to raise the priesthood to the high moral level suitable to its sublime duties. In the West, a most important stem in this direction was the insistence on celibacy. But as we are concerned here solely with doctrinal matters, documents on this are not given.

Order is a true sacrament instituted by Christ who ordained the Apostles at the Last Supper. It is administered by the laying on of hands and the key phrases of the ordination preface. Only a Bishop can validly ordain. Order is a purely ecclesiastical concern. The effect of the sacrament of order is to impart the Holy Spirit and to impress an indelible character, which permanently distinguishes those in orders from the laity. The laity also has a part in Christ's priesthood, but in another manner. The office of Bishop is above the priesthood (which in turn is above the diaconate) and gives special powers of consecration. To the priesthood belong the celebration of Holy Mass and the power of forgiving sins. The subdiaconate belongs to the priesthood and diaconate to the 'major orders.' In addition, the four 'minor orders' were instituted by the Church. Conditions for the valid reception of order are baptism and being of the male sex.