Featured
articles
An exercise for a healthy communication
Happy love manifests itself not as a state of original grace, but as a continuous construction 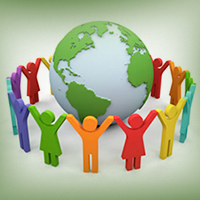 I suggest that each one answer on their part and then exchange what they have written. First of all, this exercise will give you the opportunity to say in a calm and timely manner what you do not like, what bothers you. When this is done with love, with desire to overcome and with certain frequency, many things are smoothed and the accumulation of "poisons" is avoided.

It is not about dreaming of a perfect marriage, where there are never problems. There will always be pebbles in the shoes. But the number of problems can be reduced considerably. Otherwise, the problems look huge or accumulate so many that life totally darkens. Doing this little exercise frequently you will discover that, among the 10 things that "bother", eight are easily eliminated. The other two can be more complex. (But it would be a good thing to walk with 8 less pebbles in the shoe!) It is not about perfect marriages where you do not have to make efforts and sacrifices or suffer for each other, but I do believe that there are things that can easily be corrected. By making life happier and avoiding bigger problems. In addition, with a happier life, spouses can dedicate themselves with more effort to fulfill their great mission as a marriage.

When exchanging answers about what they "believe" that they like or dislike, they can verify if they really know each other well or if there are hidden misunderstandings. Sometimes, we think we know the people who are close to us and it is not always true. At least that is what the people who contributed the following cases make out.

* I met a husband who believed that everything was perfectly fine because he considered himself a hard worker. But there were many other facets that he forgot and that disgusted his wife.

* A woman considered herself an excellent wife because she was a good mother, industrious, etc. but her husband had many resentments because of her attitudes towards family members and the good use of money.

Below is a chart that can help you understand how this exchange of likes and dislikes might work. We hope that it is a good remedy for leaks. There is no magic recipe for the difficulties of life, but there are ways in which the burden can be lighter.

In marriage, in particular, a small change, a seemingly insignificant improvement can change the climate surrounding the couple. I knew the case of a couple who had lost the habit of saying goodbye with affection in the morning and greeting each other with affection when they met again in the afternoon. After a marriage renewal they set out to revitalize those two moments of the day. Many other good things happened as a result, and the whole family felt the change. This is also due to the fact that life is formed by the repetition of acts. The effect produced by the improvement of only one is enhanced precisely by its repetition. Now, everything that repeats has the danger of becoming routine, in the sense of losing its taste, its soul. The first time leaves a strong impact. Afterwards, it does not impress us anymore. Therefore, it is necessary to identify those aspects of married life that should never lose their ability to impact.

Once identified, the couple must put means to continuously restore their vitality. This is done through dialogue, pleasant surprises, changes in environment, etc. Sometimes, we need an injection of spiritual energies. Let's not forget that love has its greatest strength in the soul. If it is weak, our love is in danger.

To conclude, I would like to transcribe a quote that reflects excellently the spirit with which a marriage must fight for good communication.

"Happy love manifests itself not as a state of original grace, nothing left but to enjoy all life, but as a continuous construction." Based on the sentiment, we must reinforce it with intelligent understanding and with determined efforts to resist the temptations of the road, to overcome its difficulties and its obstacles, above all to ascend, with the partial sacrifice of its selfishness and the gift of oneself to the consort, towards the luminous heights of a good and cordial understanding, of deep affection, of a common joy and bliss.

Even happy love knows of crisis. It has its moments of lethargy, its tiredness, its occasional faintness, its sicknesses.

Spouses know that life and love are a long procession of health and illness, of likes and dislikes, of friction and agreements, of successes and failures, of hopes and worries, of happiness and suffering. But to have worked and suffered together, to have walked for a long time along the path of the years, to have acquired over the years a healthier philosophy of life, all this gives their love of today a serenity, a simplicity, a depth that is the fruit of wisdom. They are not disabused of their love: throughout the days, it was in the background, and despite everything, their best wealth.