Featured
articles
A True Encounter
Benedict XVI in conversation with Fidel Castro at the apostolic nunciature. 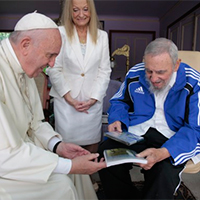 In the end, the meeting took place. Benedict XVI and Fidel Castro chatted amicably for about thirty minutes. The elder leader had expressed his keen desire to meet Benedict XVI, "a Pope whom I greatly admire" had said several times and repeated it to the Pontiff personally when he met him. Both were satisfied the weather was serene, relaxed, friendly. Castro arrived punctually at the nunciature. He was received by Cardinal Tarcisio Bertone, Secretary of State, with whom he waited for the Pope. In those few minutes the Cuban leader manifested his attention to the life of the Church.

He confessed that he for a long time waited to see on the altars Mother Teresa of Calcutta, "a great benefactor of Cuba" to define her, and John Paul II, "a man I have learned to appreciate very much". And he expressed these feelings spontaneously.

Castro looked tired and scarred by the years, but lucid and lively. And when he met Benedict XVI, it was perceived that he did indeed have the desire to know him in person. Castro immediately showed great interest in knowing, to know. He directed the Pope a series of far reaching questions. The first surprised: "Why has the liturgy changed so much?" His remembrance dates back to the period before the Council and the Pontiff began his response precisely from Vatican II. "The conciliatory parents considered it appropriate to change the liturgy to make it more accessible to the faithful," the Pope explained. Although that, he continued, has created situations that suggest further changes."

Then, extending their gaze to the world, they spoke of the cultural, social and economic changes that, despite the progress of science in all fields, seem to be a cause of tension in man, rather than welfare. The Pope blamed this worsening of the situation on the claim to keep God away from the world scene. The Church, for its part, tries to put it back at the center of the history of man. This is your mission.

Fidel Castro then wanted to know what the role of a Pontiff was. Benedict XVI told him of his mission as a spiritual guide of more than a billion faithful. "I must go meet them," he said, "wherever they are." It was an emotional moment: as the Pope spoke, Castro nodded. And his face showed his sincere admiration for Benedict XVI. Then he asked the Pope, almost contemporary to him, how he manages to do all that. The Pontiff smiled and said, "It is true, I am old, but I can still do my duty in the service of the Church".

They kept talking about age, because Castro, expressing his harmony with Benedict XVI, justified it by "belonging to the same generation". Moreover, he said that he would have liked to be able to talk to him more often about everything that troubles him. "Precisely the fact that we belong to the same generation," the Pope replied, "will keep us in touch through our generational thinking".

Castro then told the Pope that he has difficulty understanding well what the meaning of religion is in the face of the continuing evolutions of science. The Pontiff briefly explained to him the meaning of the encounter between science and faith, between faith and reason, to help him understand that these are not two opposing areas, but two fundamental moments for man's conscience, which as such should not be separated.

Castro was eager to know. Impressed by the Pope's explanations, by his knowledge, he confessed that, although he spends his time reading and reflecting on everything concerning the life of man, he had understood at those times that there was still many things to know. "Do you recommend a book to deepen my knowledge of this matter?" he asked. The Pope replied: "Certainly. But let me think a little bit about what to advise you. Then I'll point out the titles through the nuncio".

These were the last words of the conversation. Then Fidel Castro, who had Mrs. Dalia by his side, introduced three of his sons to the Pontiff and said goodbye. And as he left the nunciature he kept repeating to those he found: "Greetings to the Holy Father", even though he had just been with him. He didn't seem to want to quit.