Featured
articles
A Man Whom God Called Father
A simple man, like everyone; and yet he was a man like none. 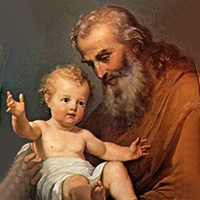 They called him the carpenter. And, certainly, he was a hard-working man. He kept and worked for his family with the sweat of his brow. A simple man, like everyone; and yet he was a man like none. Joseph was the father of Jesus.

Christ, being God, always knew who his Son was. But he was also fully male and surely had to learn about his father with the example of a father of flesh and blood. Moreover, the Son of God was well aware of the person he chose for his childhood on earth: and he will have chosen the image closest to divine fatherhood.

Years later, all of Israel would listen to the message of that Jesus of Nazareth. He spoke to the people of a Father in heaven. Nurture the poor with hope in the provident Father: “Powerful and tender at the same time, great but attentive to the little ones, just and merciful ... Where did these words come from? Who had taught him that? Was he not Joseph's son?” (Cf. Lc 4, 22)

Saint Joseph was a man of authority: the blood of so many kings ran through his veins. But the power he exercised was not like the one who governs for himself. Even before getting married, Joseph had his center of attention in others: he decides to secretly repudiate Mary, so as not to lead her to scandal or to punishment according to the law of Moses. His authority is a service, it is giving oneself without reservations, it is making a gift of what belongs to him. We can imagine him working extra hours to buy a new dress for Mary. And when he returns, tired of a long and heavy day, after wearing himself out in the sun, he does not deny his precious hours of rest. There we see him at the end of the afternoon explaining to Jesus some text of Moses or the Prophets ... And more than his salary or his time, all his life project had become his wife and his son, because he did not go down in history as a rich merchant, or a leader of the masses; simply and simply we know him as the husband of Mary and the "adoptive" father of Jesus. Nothing less than Jesus and Mary; His greatness was his family.

The power of the service became the power of defense when necessary. Jesus was born in a stable not far from the field; someone had to be watching so that wild beasts would not come. If King David was brave enough to kill a lion while taking care of the sheep in those same fields of Bethlehem, what would Joseph, a descendant of David, not do to guard his family! Then, unexpectedly, he had to leave with Mary and Jesus far from Judea and Herod. How much attention and effort to leave no trace of the flight! How many nights without sleeping in the middle of the desert to make sure there were no thieves or that the soldiers did not follow them to kill the child! Precisely that child who would be the savior of Israel. What a great responsibility it was to make sure that Jesus grew up healthy and strong!

How does Joseph exercise this custody?

With discretion, with humility, in silence, but with a constant presence and total fidelity, even when he does not understand. From his marriage with Mary to the episode of Jesus in the Temple of Jerusalem at the age of twelve, he accompanies at all times with care and love. He is with Mary, his wife, both in the serene moments of life and in the difficult moments, in the trip to Bethlehem for the census and in the trembling and joyous hours of childbirth; in the dramatic moment of the flight to Egypt and in the eager search of his son in the Temple; and later in the daily life in the house of Nazareth, in the workshop where he taught the office to Jesus. (Pope Francis, March 19, 2013)

Jesus in his mission also became a father. The paralytic who comes down from the ceiling calls him "son" (Mt 9,2), and the same to the woman who touched his cloak: "Child, your faith has saved you." (Mk 5, 34) They were not children according to the flesh, just as Christ was not related to Joseph, but both made shine the most beautiful facet of fatherhood. For being a father is giving the best of himself and giving his own life ev