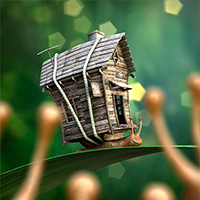 If people join together to build their homes, they will learn by building, they will grow by learning and they will ascend morally by seeing the results.

In the first place, it is necessary to know that in the Dominican Republic there is a deficit of one million homes. The low level of income and high financial costs of mortgage loans means that many Dominican families can not aspire to owning their own homes and, many thousands more, in totally unworthy homes.

Having lived all their life in conditions of poverty and belonging to the Franciscan religious order, with its ideal of renouncing the material, as well as ensuring that thousands of Dominicans live in dignified conditions and in their own homes, is the impulse that has led to the friar José María Guerrero to create the True Future Foundation and to start a donation campaign to build housing for people with scarce resources.

Originally from Higuey, Fray José came to the El Caliche community of Villa Duarte, in Santo Domingo Este, when he was three years old. He lived there firsthand poverty, marginality and the vicissitudes of coexisting in a neighborhood that when it rains "everything" it is flooded, without any government authority being interested enough to try to solve the problem.

That's why the first stage of the project Dignified Housing for the Poor: all by El Caliche de Villa Duarte will be initiated in that slum raised in a hollow, with the temporary relocation of some 70 families, who will then return to what will be their new home.

To achieve this goal the Foundation aims to collect between 30 and 50 million dollars, through the donation of every Dominican anywhere in the world. They aspire to receive at least 50 pesos a year from each person who listens to the message, and from those who reside abroad 20 dollars or 20 euros.

"Dominicans can give us what politicians have denied us, throughout the history of the Dominican Republic, for example, housing."

"I have been convinced in my years of Franciscan and priestly life that it is useless to keep waiting in government institutions, since these are directed, mostly, by people without conscience and little interested in the welfare of the people, but rather in their own interests".

The donations campaign will be permanent, but the Foundation will repeat it every December to encourage the good will of many people "who would like to give to others, but do not know how to do it", in order to gather the necessary resources to finish the construction of 100 buildings of three levels and with 12 apartments each.

The residents of El Caliche will contribute with the labor of the housing project, which in the end will be theirs. Fray José believes that if in each poor sector people join together to build their homes, or residential buildings they will learn by building, they will grow by learning and they will ascend morally by seeing the results.

"We want to follow up on the parents so that, through a process of human and technical training, they get out of their situation of misery".

"We know it is a slow and difficult process, but if all men and women of good will join together, we will be able to raise a different generation, capable of living together healthily, respecting life, the rights of others and the environment; a generation willing to fight and keep the peace. "