Featured
articles
A Good Father Builds his Home
The Christian father knows how to love his wife, serve his church, educate and discipline his children 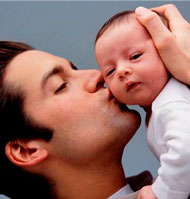 A family man that’s faithful to the love of God, and to the Church, will be able to rise up in the name of his wife and children to announce to the world the teachings of Christ.

The concept of a father is that of a man, a leader and a hero. Always wise and exemplary in his behavior. Among the great men of the Bible, Joshua, the successor of Moses, was confirmed as leader of the people of Israel (on his journey to the promised land), with miracles such as the collapse of the walls of Jericho and the division of Jordan river’s waters. His obedience, fidelity and service to God stood out above people who were still struggling, in rebellion, between worshiping only Yahweh or continuing to serve other gods.

The strength of Joshua in front of the people, when he pronounced the words: "I and mine will serve Yahweh" clearly shows the decisive and strong character of a man who had consolidated a home dedicated to serve his God. As leader of his house and head of the family, he declared his decision not to serve any other god but the God of Israel, with the backing of his wife and children.

Today, the world offers various forms of idolatry, through consumerism, technology, humanism, science, politics, ideologies, witchcraft, and so on. But a family man faithful to the love of God, and to the Church, will be able to rise up in the name of his wife and children to announce to the world that his house is grounded in the teachings of Christ, which are inclined towards love and service to God.

A Christian father builds his house on the eternal values ​​of the Word of God, it’s an example of integrity in front of his children, and teaches them to be noble servants, faithful to the Church, to the community and to their family. A good father decides for him and for his home the best course of it, always taking into account the commandments of God, as well as defending above all the highest moral values ​​and the most expensive Christian virtues.

The Christian father knows how to love his wife, to serve his church, to educate and discipline his children, to strive for holiness and to consecrate himself more and more in the love of Christ, since his goal is to become the closest thing to his Lord. So, a father always leads by example. A father does not destroy his house, but builds it. A good father does not hurt his wife and children, but encourages them and leads them in godly life. A good father builds, he does not mortify his own. Let us celebrate together the courageous parents who have taken with serious frankness the commitment to follow Christ and lead his family with devotion, love and service to their fellow men!