Featured
articles
Charity is Easter's Fruit
What is my fruit at this time of Easter? 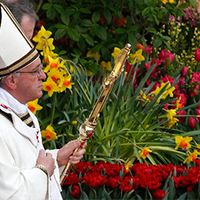 Have you ever asked yourself, what is my fruit at this time of Easter? It is absurd, but very true, using an analogy, I dare to say that most people believe they’re like a delicious grapefruit, others can say “I’m a tangerine”, another may say “I’m a strawberry”, but the most significant thing of a fruit is that it feeds us, and helps others.

However, when we speak about the fruit of the Passover, what’s important is charity and this I say because once we’ve had an encounter with the risen one, we are then able to LOVE and GIVE without expecting ANYTHING in return.

Today I dare to say as a psalm says: “The Lord is compassionate and merciful”, in this way I want to respond to the reality we live day by day, due to indifference, selfishness and vanity, today we undoubtedly perceive the way in what God calls and does it by means of insignificant things that surround us, for example,  what would you do if as with Moses through the Burning Bush, and with you brother as the Lord calls you? Give yourself this opportunity and reflect on this question that I ask myself everyday.  But coming back to Moses’ call to be in that place the Lord orders him to take off his sandals because the place he steps on is sacred, today he invites us to take away what hinders us from being in front of his presence and that which sometimes prevents us from being before the Lord : egoism, arrogance, egocentrism and spiritual blindness.  We have to keep in our thoughts the presence of God at all times, and not only when in church ( or in trouble).

That is why, in the light of the Gospel of Saint John, let us see how the Lord manifests himself to the disciples, and the main message is: " May the peace be with you", a peace that we need so much and that we have lost because of our indifference, because of our coldness, because like Tomas (nicknamed the Twin) we need to see in order to believe in the real presence of the Lord Jesus in our midst.

Today the Lord continues to appear giving us his peace, and we do not have time to: LISTEN, SEE, FEEL, and MUCH LESS SEEK HIM. Without a doubt we have a lot to learn from the first Christian communities, we have everything in common, and I’ll tell you why, and let's be realistic, let’s not want to cover the sun with a finger, because we have not known how to give fruits of charity, we harvest pride, pain, envy, jealousy, and that leaves us just as Tomas’ position:  “until I see the signs of the nails I will not believe”.

Dear Brother and Sister, NOW YOU NEED TO SEE TO BELIEVE, THERE IS NO WORSE BLIND THAT THE ONE THAT DOES NOT WANT TO SEE, today I invite you to look at the CHURCH and see what He is suffering, contemplate the Lord in the poor, in which He is alone , in the one who suffers, the sick, the prisoner, the slandered, the defamed, that this PASSOVER OF THE LORD is not a reminder of an event BUT it is an EVENT that must be INCARNATED in each one of us.

Today even Pope Francis through his Apostolic Exhortation Gaudate et Exsultate (Called to Holiness in today's world), and also remembering those who were crushed by the tower of Siloam, today the Pope asks you, what kind of tower will crush us in this time? I tell you which: the tower of indifference, of pride, of wanting to be more than others does not matter if the dignity of others is at stake, hence the Lord Jesus himself gives us an opportunity every day, despite so long we have not borne fruit and you know why, because he with his blood on the cross has paid that debt of ours which is SIN, hence Pope Francis invites us to be saints, from our state of life, layman, MARRIAGE, RELIGIOUS LIFE, CLERGY, with the testimony and always taking others to the encounter with the Lord.

Today, each one of us represents the fig tree that the Lord alludes to in a parable, because it reminds us that with our coldness we are not capable of producing fruit, we are not capable of wanting to change and always our pretexts are: " If I do it, I’ll let myself be hurt ", “they’ll abuse me "," they won’t respect me ". To you, dear brother and sister, it is time to remove the soil that we have in our hearts, to water it and fertilize it with the Word of God, in order to bear fruit in charity and together create the civilization of love (as Pope Blessed Paul VI said that is, transform society and be more human and more brothers.

Remember and do not forget: God is manifested in the simple, with Moses in the bush and today with us with his RESURRECTION, I really invite you to become an instrument of God's grace and that we can feel the call of God Lord who tells us: Go and tell your brothers, the mercy of the Lord is eternal, ALLELUYA.