Fragments of the Compendium of Social Doctrine of the Church explaining the dimensions and commitments of the Christian in public life. 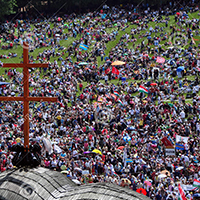 The last section of the Church's Compendium of Social Doctrine explains the pastoral and ecclesial dimensions of Christian engagement in public life.

Based on a Christian anthropology, the Social Doctrine of the Church sheds light on authentic human values, inspiring and sustaining the task of giving Christian witness in the world, observes the compendium. It is also an aid in the task of enculturing faith and helping the modern world to overcome the gap between the Gospel and the culture.

The Compendium also recommends that the social message of the Gospel be the guide in the mission of the new evangelization. In their pastoral role, social teaching will not only help men and women discover the truth but also encourage Christians to testify "in the spirit of service to the Gospel in the field of social activity" (No. 525).

Social education also has a vital role in Christian formation, especially those who have responsibilities in social and public life. But for this to be a reality, the compendium encourages social doctrine to receive a higher priority in catechesis so that the faithful are better educated on this subject.

This instruction should not be just the mere transmission of abstract theory, adds the text. «In the context of catechesis it is important above all that the teaching of the Social Doctrine of the Church is aimed at motivating the action of evangelization and humanization of the temporal realities» (No. 530).

The Compendium also notes that social doctrine can be a useful tool in ecumenical dialogue and the dialogue between the Church and the civil world. Defending the dignity of the human person, promoting peace and helping the poor to improve their position are fields of action where cooperation with others can increase Christian unity.

Pastoral activity
All Christians have a role to play in the social sector, explains the text. Within the Church, the bishops, assisted by priests, religious and laic, are responsible for promoting the teaching of social doctrine. In this context, the Compendium asks that priests receive adequate training in the doctrine of the Church so that they may be able to assist in the instruction of Christians lay.

The laic also has a vital role in the dissemination of social doctrine, beginning with "an exemplary testimony of life rooted in Christ and lived in the temporal realities" (No. 543). This testimony has its root in the gift of grace, explains the Compendium, thus distinguishing itself from a humanist action that is limited to temporal considerations. "The eschatological perspective is the key that allows a correct understanding of human realities", the Compendium insists in No. 544.

To help maintain this perspective, the text invites the faithful to cultivate a true spirituality and to consolidate their moral life. Deepening the inner life through constant formation will help to ensure greater harmony between everyday life and Christian faith.

The Compendium recommends, in addition, to lay prudence in the social field. Prudence is needed in three moments: by studying and reflecting on the subject in question; by evaluating reality in the light of God's plan; and deciding on the action to take. Prudence, the text continues, is not human cunning or shyness in making decisions, but a virtue that helps to decide with wisdom and courage the course of action to take.

The establishment of ecclesial associations, which can guide the faithful in this field, is another step recommended by the Compendium. Groups and associations can play a valuable role in providing training to their members in this area, as well as coordinating pastoral activity.

A culture of service
By implementing social doctrine, the Compendium suggests that the viewpoint adopted is that of the service. The credibility of Church teaching in this area, in fact, "comes more immediately from the testimony of action than from its internal consistency or logic" (No. 551).

-Service to the human person, affirming the inviolability of human life, from conception to natural death. Human dignity also requires freedom of conscience and religion, as well as the defense of marriage and family.

-Service in the cultural area, widely understood. The Compendium notes the problems with the consumer lifestyle and the emphasis placed on superficial aspects. We need to regain a genuine sense of human growth and develop our ability to communicate and relate to others.

-Encouraging the participation of Catholics in social and political life is another priority. The implication in public life is necessary to present in an effective form the proposals that emanate from the catholic vision of the social life.

-Preserving the ethical dimension of culture is another important task. Culture can become barren and decadent, or it can be a means to enrich people's lives. Securing the latter requires people to be prepared to use their abilities to "self-control, self-sacrifice, solidarity, and willingness to promote the common good" (No. 556).

-Specifically, the Compendium underlines, within the present culture, some fields where the action is particularly necessary: to guarantee the rights of each person; ensure a commitment to the truth; work to ensure that the religious dimension of culture is respected, and use the media properly.

-Service in the economy. The Compendium invites Christians to remember the centrality of the human person. They also urge them to better harmonize the demands of economic efficiency and the requirements of social justice.

-Service in politics. Pursuing the common good in the spirit of service should inspire secular Christians, recommends the text. The text also insists on proper attention to the moral dimension of political life and a growing Christian witness by politicians.

A civilization of love
The conclusive pages of the Compendium are dedicated to the theme of building a "Civilization of Love". People are looking for meaning in their lives, observing the text, and the Church responds with the proclamation of the Gospel of Christ. Through faith in God and Jesus Christ, Christians can get inspiration from the principles that should order private and public life.

Carrying out a renewal of society to ensure justice and solidarity is not an easy task, and we should not think that there is a magic formula for solving problems. Our salvation does not rest in a formula but in the person of Christ, who is in the Gospel and the tradition of the Church.

And even though believers know that there will never be an earthly paradise, their hope founded on Christ gives them confidence in building a better world. In this effort, we should be guided by the principle of the primacy of love. Love, adds the compendium, should permeate any social relationship and be the superior norm for all activity.

The commandment of love contained in the Gospel should be for Christians a message that will transform them and lead them to reject selfishness and individualism. This love, in turn, requires the practice of justice and inspires us in the donation of ourselves. Appropriate words to close the synthesis of the Social Doctrine of the Church.