Featured
articles
Of weapons
What does the Church says of weapons?

Extract of many ecclesiastical documents about weapons. 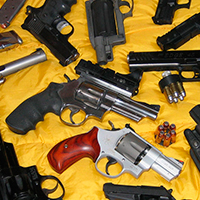 Of weapons
What does the Church say of weapons?

334. In the opposite direction, we see, with great pain, how in the economically more developed nations have been manufactured, and are still manufactured, huge armaments, dedicating to their construction an immense sum of spiritual and material energies. With this policy, it turns out that, while the citizens of such nations are forced to endure very serious sacrifices, other peoples, on the other hand, are left without the necessary aid for their economic and social progress.
(Pacem in Terris, N. 109)

335. "I was hungry, and you did not feed me... I was naked and did not you clothed me... in prison, and you do not visit me" (Mt 25, 42). These words acquire a greater warning burden, if we think that, instead of the bread and the cultural aid of the new States and nations that are awakening to independent living, it is sometimes offered in abundance modern weapons and means of destruction, put at the service of armed conflicts and wars that are not so much a requirement of defending their righteous rights and their sovereignty, but rather a form of "patriotism", of imperialism, of neo-colonialism of different kinds.
(Redemptor Hominis, N. 16)

336. The teaching of the Catholic Church is therefore clear and coherent. It deplores the arms race, calls for at least a progressive mutual and verifiable reduction, as well as greater precautions against possible errors in the use of nuclear weapons. At the same time, the Church demands each nation's respect for its independence, freedom and legitimate security.
(Message to the second United Nations special session on Disarmament, No. 5)

337. An unbridled arms race absorbs the resources needed for the development of domestic economies and to help the less-favored nations. Scientific and technological progress, which should contribute to the well-being of man, becomes an instrument of war: science and technology are used to produce increasingly improved and destructive weapons.
(Centesimus Annus, N. 18)