Excerpt from the Catechism of the Catholic Church: Part three, life in Christ; Second Section, the Ten Commandments; Chapter two, you shalt love your neighbor as yourself; Article 7 the Seventh Commandment; Chapter III the Social doctrine of the Church 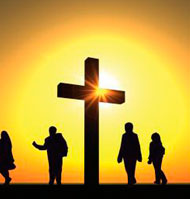 By: Catechism of the Catholic Church | Source: Vatican.va

2419 “The Christian Revelation... leads us to a deeper understanding of the laws of social life” (GS 23, 1). The Church receives from the Gospel the full revelation of the truth of man. When it fulfills its mission of announcing the Gospel, it teaches man, in the name of Christ, his dignity and his vocation to the communion of people; and he discovers the demands of justice and peace, according to divine wisdom.

2420 The Church expresses a moral judgment, in economic and social matters, “when it is demanded by the fundamental rights of the person or the salvation of souls” (GS 76, 5). In the order of morality, the Church exerts a different mission than the political authorities exercise: it deals with the temporal aspects of the common good because of its ordination to the supreme well, our ultimate goal. It strives to inspire fair attitudes in the use of the land property and socio-economic relations.

2421 The social doctrine of the Church was developed in the nineteenth century when there is a meeting between the Gospel and modern industrial society, its new structures for the production of consumer goods, its new conception of society, the State and the Authority, their new forms of work and property. The development of the church's doctrine in economic and social matters testifies to the permanent value of the teaching of the Church, at the same time as the true meaning of its always alive and active tradition (cf. CA 3).

2422 The social teaching of the Church contains a body of doctrine articulated as the Church interprets the events throughout history, in light of the whole of the word revealed by Christ Jesus and with the assistance of the Holy Spirit (cf SRS 1; 41). This teaching will be all the more acceptable to men of goodwill the more the behavior of the faithful inspires.

2423 The social doctrine of the Church proposes principles of reflection, draws judgment criteria and gives guidance for action:

Any system, according to which social relations must be determined entirely by economic factors, is contrary to the nature of the human person and of his acts (cf CA 24).

2424 A theory that makes a profit the exclusive rule and the ultimate end of economic activity is morally unacceptable. The disordered appetite for money does not cease to produce pernicious effects. It is one of the causes of the many conflicts that disturb the social order (cf GS 63, 3; LE 7; CA 35).

A system that sacrifices the fundamental rights of the person and the groups in the interest of the collective organization of the production is contrary to the dignity of the man (cf GS 65). Every practice that reduces people to be nothing more than means of profit-making enslaves man, leads to the idolatry of money and contributes to spreading atheism. You cannot serve God and money (Mt 6, 24; Lc 16, 13).

2425 The Church has rejected the totalitarian and atheistic ideologies associated in modern times to communism or socialism. On the other hand, it has rejected in the practice of capitalism the individualism and the absolute primacy of the law of market on human labor (cf CA 10, 13.44). The regulation of the economy by the single central planning perverts at its base the social linkages; its regulation only by the market law breaks social justice because many human needs cannot be satisfied by the market (CA 34). Reasonable regulation of the market and economic initiatives must be promoted, according to a just hierarchy of values and with a view to the common good.