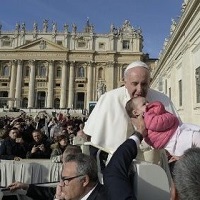 
*******
As we prepare to conclude this celebration, my thoughts cannot help but go to Palm Sunday 25 years ago. It was 1985, which the United Nations had declared "Year of Youth". The Venerable John Paul II wanted to take advantage of that occasion and, commemorating the entrance of Christ in Jerusalem acclaimed by his young disciples, he began the World Youth Day. Since then, Palm Sunday has acquired this characteristic, which every two or three years is also manifested in great world meetings, tracing a kind of youthful pilgrimage throughout the planet in the following of Jesus. 25 years ago, my beloved Predecessor invited young people to profess their faith in Christ who has taken upon himself the cause of man (Homily, March 31, 1985, Nos. 5, 7: Insegnamenti VIII, 1 [1985], 884, 886).

Today I renew this call to the new generation, to bear witness with the soft and luminous force of truth so that the men and women of the third millennium do not lack the most authentic model: Jesus Christ. I entrust this mandate in particular to the 300 delegates of the International Youth Forum, coming from all parts of the world, convened by the Pontifical Council for the Laic.

[The Pope greeted the pilgrims in several languages. In Spanish, he said:]

I greet with affection the Spanish-speaking pilgrims present in this Marian prayer. With the celebration of Palm Sunday, the Church commemorates the Triumphal Entry of the Lord in Jerusalem, thus beginning this great and Holy Week, where we will celebrate the mysteries of the Passion, Death, and Resurrection of Our Lord. I invite you, dear brothers, to participate with special fervor in the liturgical celebrations of the next days, to experience and enjoy the infinite mercy of God, who frees us from sin and death out of love. Good and holy holidays. Thank you.

Finally, I greet with affection the Italian-speaking pilgrims, particularly young people from various cities and dioceses. Dear friends, do not be afraid when you follow Christ to share misunderstandings and offenses. Serve it in the most fragile and disadvantaged people, in particular in your contemporaries in difficulties.

For this purpose, I also wish to assure a special prayer for the World Day of Autism Carriers, promoted by the UN, which will be held on April 2.

At this moment, our thoughts and our hearts are directed in a particular way to Jerusalem, where the paschal mystery was realized.

I am deeply saddened by the recent conflicts and by the tensions verified once again in that City, which is the spiritual homeland of Christians, Jews and Muslims, prophecy and promise of that universal reconciliation that God desires for the entire human family. Peace is a gift that God entrusts to human responsibility so that it cultivates it through dialogue and respect for the rights of all, reconciliation and forgiveness. Let us pray, therefore, that those responsible for the fate of Jerusalem courageously undertake the path of peace and follow it with perseverance!

Dear brothers and sisters! As Jesus did with the disciple John, I also entrust you to Mary, saying: There you have your mother (Jn 19:27). We address all of them with filial confidence, reciting together the Angelus prayer.