The message of the Pope in the framework of the XVI Plenary Assembly of the Pontifical Academy of Social Sciences where the world economic crisis was analyzed in light of the ethical principles included in the social doctrine of the Church. 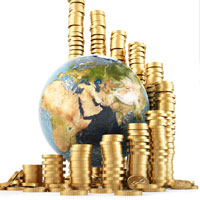 The economy must be oriented to the search for the common good
The message of the Pope in the framework of the XVI Plenary Assembly of the Pontifical Academy of Social Sciences where the world economic crisis was analyzed in light of the ethical principles included in the social doctrine of the Church.


VATICAN CITY, APR 30, 2010 (VIS) - Today the Pope received the participants in the XVI plenary assembly of the Pontifical Academy of Social Sciences, which from April 30 to May 4 analyzed the world economic crisis in the light of the ethical principles encompassed in the social doctrine of the Church.

"The fall of the global financial system," the Holy Father said, "has shown, as we know, the fragility of the current economic system and the institutions related to it."

Benedict XVI stressed that "instead of a spiral of production and consumption that takes into account narrowly defined human needs, economic life should be seen as an exercise of human responsibility, intrinsically oriented to the promotion of the dignity of the person, the search for the common good and the integral development -political, cultural and spiritual- of individuals, families and societies ".

"In my encyclical" Caritas in Veritate "I observed that" the crisis forces us to revise our path, to give ourselves new rules and to find new forms of commitment ".

The Pope pointed out that "the Church, based on her faith in God the Creator, affirms the existence of universal natural law. (...) As part of the great patrimony of human wisdom, the natural moral law, which the Church has adopted, purified and developed in the light of Christian revelation, it serves as a beacon that guides the efforts of individuals and communities to pursue good and avoid evil, while committing to building a truly just and humane society. "

"The promotion of the common good, based on respect for the dignity of the human person and recognized as the main objective of the production and trade systems, political institutions and social welfare, is one of the indispensable principles that form an integral ethical approach for economic life. In our days, concern for the common good has taken on a more global dimension; it has also become more evident that the common good encompasses responsibility towards future generations, from now on, solidarity between generations it must be recognized as a fundamental ethical criterion for judging any social system. "

The Holy Father affirmed that "these realities point to the urgency of strengthening the governance procedures of the world economy, although with due respect for the principle of subsidiarity." In the end, however, all economic and political decisions must be aimed at "charity in the truth".

"Because" without truth, without trust and love for the truth, there is no social conscience and responsibility, and social action is left at the mercy of private interests and power logics, with disintegrating effects on society, "he concluded.