Message from Bishop Enrique Sánchez Martínez, Auxiliary Bishop of Durango regarding the climate of violence in Mexico 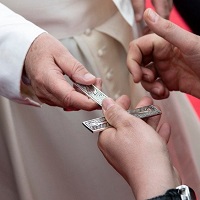 A society reconciled with God is closer to peace

A society reconciled with God is closer to peace
Message from Bishop Enrique Sánchez Martínez, Auxiliary Bishop of Durango regarding the climate of violence in Mexico


The events that have happened in the world and throughout our country, leave us first, a negative environment: in our country, the decomposition of the law and moral attitudes in the background, the experience of war, violence and insecurity; the corruption of public officials and impunity; organized crime and drug trafficking; poverty, lack of employment, rising cost of living, which cause emigration and greater social inequality; the abandonment of the countryside and the peasants; the neglect of ecology and climate change, etc., have left us with a bleak panorama.

At the level of our universal Church, Pope Benedict XVI has expressed the great anguish to which we have been exposed in 2010: we have been disturbed when, precisely in this year and a dimension unimaginable to us, we have had knowledge of abuses against minors committed by priests, who stifle the Sacrament in its opposite: under the mantle of the sacred they deeply hurt the human person in his childhood and bring them damage for a lifetime ... We must accept this humiliation as an exhortation to the truth and a call to renewal. Only the truth saves. We must ask ourselves what we can do to repair as much as possible the injustice committed. We must ask ourselves what was wrong in our announcement, in all our way of configuring the Christian being, so that a similar thing could happen. We must find a new determination in faith and good. We must be capable of penance. We must strive to try everything possible, in preparation for the priesthood, so that a similar thing cannot happen again. Review and restructure our Seminar is one of our challenges.

The year that has ended has also been marked unfortunately by persecutions, discrimination, by terrible acts of violence and religious intolerance. Especially in Iraq and in the Middle East. Christians are currently the religious group that suffers the most persecutions because of their faith. Many suffer everyday offenses and often live in fear because of their search for the truth, their faith in Jesus Christ and their sincere call to recognize religious freedom. All this cannot be accepted, because it constitutes an offense against God and human dignity; it is also a threat to security and peace and prevents the realization of an authentic integral human development. The Message of this January 1, 2011, at the World Day for Peace, Pope Benedict dedicates it to this theme: Religious freedom, the path for peace. In Mexico, we must move forward on this issue.

The theme of the responsibility of Christians in this time and the task of the Church to proclaim the Gospel, Pope Benedict XVI exposed it in his visit to England: this brings us to a fundamental issue: the question about the truth and the own faith. Alexis de Tocqueville, in his time, had observed that in America democracy had been possible and had worked because there was a basic moral consensus that, going beyond individual denominations, united all.

Only if there is a similar consensus on what is essential, constitutions and the law can work. This deep consensus coming from the Christian heritage is in danger where instead, instead of moral reason, the mere finalist rationality of which I have spoken a moment ago is placed. This means blindness of reason for what is essential. To fight against this blindness of reason and to preserve its capacity to see the essential, to see God and man, what is good and what is true, is the common interest that must unite all men of goodwill. Is the future of the world at stake? In this subject, the church must give its contribution.

The world, with all its new hopes and possibilities, is distressed by the impression that moral consensus is dissolving, a consensus without which legal and political structures do not work. We must direct our prayer to the God of history and to his Son the Lord who has manifested himself to us as "the just King"; let it be like the cry addressed to the Lord, who was sleeping in the boat of the disciples buffeted by the storm and about to sink. When his powerful word had tempered the storm, He reproached the disciples for their little faith (cf. Mt 8:26 and par.). I wanted to say: in you, faith has fallen asleep. The same want to tell us too. In us, too, faith often falls asleep.

Let us ask him, therefore, to awaken us from the dream of a faith that has become tired and that gives back to our faith the power to move mountains, that is, to give just order to the things of the world.

At the end of the Message for the World Day of Peace, Pope Benedict XVI says: "The world needs God. It needs ethical and spiritual values, universal and shared, and religion can contribute in a precious way to its search, for the construction of a just and peaceful social order, nationally and internationally. Peace is a gift from God and at the same time a project to be carried out, but it will never be fully fulfilled. A society reconciled with God is closer to peace, which is not the simple absence of war, nor the mere result of military or economic predominance, much less deceitful cleverness or skillful manipulation. Peace, on the contrary, is the result of a process of purification and cultural, moral and spiritual elevation of each person and each people, in which human dignity is fully respected. I invite all those who wish to be builders of peace, and above all young people, to listen to their own inner voice, to find in God a sure reference for the conquest of an authentic freedom, the inexhaustible strength to orient the world with a new spirit, able not to repeat the mistakes of the past. Above all, we must give Peace other weapons than those destined to kill and to exterminate humanity. Above all, moral weapons are necessary, which give strength and prestige to international law; first, that of observing the covenants. Religious freedom is an authentic weapon of peace, with a historical and prophetic mission. In effect, it values ​​and brings to fruition the deepest qualities and potentialities of the human person, capable of changing and improving the world.

Following the Pope, we open our eyes, precisely in the retrospective of the year that comes to an end; it can be made visible that the power and goodness of God are present in many ways also today as we begin a new year. So we all have reasons to thank him.