The president of the Venezuelan Episcopal Conference, Ubaldo Santana said at the San Sebastian party in San Cristobal, Venezuela, that we have exceeded the initial times of the Church in regards to martyrs.


Author: The President of the Venezuelan Bishops at the Feast of Saint Sebastian | Source: Source: Zenit.org 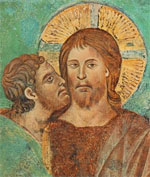 We need witnesses who, facing so much injustice, say, where is God?

We need witnesses who, facing so much injustice, say, where is God?

SAN CRISTÓBAL, Sunday, January 23, 2011 (ZENIT.org) .- The president of the Venezuelan Episcopal Conference, Ubaldo Santana said at the San Sebastian party in San Cristobal, Venezuela, that we have exceeded the initial times of the Church in regards to martyrs.

He affirmed that it is licit to desire martyrdom, but not to expose oneself unnecessarily. He also said that there is a need for "witnesses who, in the face of so many lies, injustice and corruption, can respond to the cry of the young and the poor who ask the Church like the psalmist:" Where is your God?”.

In the cathedral of San Cristóbal, Táchira, Venezuela, the feast of Saint Sebastian was celebrated with a Eucharist presided over by Monsignor Ubaldo Santa, president of the Episcopal Conference and archbishop of Maracaibo. The bishop of San Cristóbal Mario Moronta, the auxiliary of Mérida Luis Márquez, and priests of the tachirense clergy concelebrated.

The president of the Episcopal Conference praised the healthy and ancient custom to place institutions, organisms, and cities under the patronage of Jesus Christ, of his mother the Virgin Mary, and the saints of the Church. He recalled that this was the case with the towns and villages in Venezuela since the arrival of the conquistadors and the evangelizing work of the missionaries and the doctrine priests.

The devotion to San Sebastian was soon introduced by soldiers and preachers in Venezuela to defend the inhabitants from the ravages of poisoned arrows, plague, and cholera. And is one of the bonds that twin these two local Churches, underlined the archbishop of Maracaibo.

To celebrate a saint in the Catholic Church is to celebrate the glory of the Father who has manifested himself in Jesus Christ Our Lord and radiates in the holy Church and over the baptized "It does not make any sense to celebrate a saint if that feast does not lead us to look to Jesus, initiator and finisher of our faith (Cf He 12,1) and a greater rapport with him," he explained.

He made a catechesis on the martyrs of the Roman Empire. He recalled that, in Roman law, he who refused to worship the gods and the emperor, was in death row and should be executed publicly and infamously. Some cowered and apostatized of their faith, the so-called "lapse", but more were those who courageously braved the worst torments and signed with death their fidelity to Jesus Christ and their belonging to the Church.

They were given the title par excellence of the title of witnesses, of martyrs, said Monsignor Santana. Attached to the teaching of his teacher took advantage of public trials to give testimony of their faith.

San Sebastián was the commander of the imperial cohort of Diocletian and, without fearing the consequences; he exercised charity, with the incarcerated, with his soldiers and their families.

Denounced, he was sentenced to be shot. The Church recognized the great value of her testimony, introduced it very early in the catalog of the martyrs, and registered her name in the Roman Canon, together with Pope Fabian.

"A unique aspect of his testimony and sanctity is the commitment he put into facing martyrdom," said Monsignor Santana. After surviving the first ordeal, he presented himself spontaneously to the courts to declare his faith and be subjected again to martyrdom.

Is it licit to desire martyrdom, to ask God for it? The president of the Venezuelan bishops asked himself. Yes, certainly because it is the most perfect act of charity, the one that most closely resembles the passion of Jesus, assimilates more intimately to his redemptive work and produces bountiful fruits for the martyr and the Christian community.

But, he said, is it lawful not only to desire but to seek and seek martyrdom at all costs like Sebastian? As a general rule, we must say no. There is a risk of falling into presumption, false humility, and complicity with the persecutor's crime. However, your case is an exception.

He recalled that the popularity of this saint has to do with that he was buried in a catacomb of the Via Appia Antica, near the bodies of the apostles Peter and Paul. When they were transferred to the Vatican Basilica, their relics continued to attract pilgrims. "I have had the good fortune to celebrate the Eucharist several times in the chapel erected there in his honor," said Monsignor Santana.

When people talk about martyrs and martyrdom, do you tend to think that this way of expressing faith is a thing of the past? He said. But that is not the case, he said, citing a 2002 study that calculates the martyrs, in the two millennia of Christianity, in 70 million, of the 45 million and a half, 65%, in the 20th century.

So we have returned to the early days of the Church: although many deny their faith, there are many, and perhaps more, who proclaim it heroically even to the shedding of their blood, "he stressed. The great majority of those contemporary martyrs were sacrificed for hatred of the Christian faith.

This celebration, he said, is an invitation of great relevance to reassume with determination the Christian commitment to bear witness to Jesus Christ amid the realities in which we find ourselves immersed. He recalled the commitments of the Tachiren Church in its second Synod, regarding a decided apostolic action and his vigorous call to assume the radicalism of the Christian life and to respond, according to the states of life and received charisms, to the universal vocation to holiness.

He cited the witnesses that this local Church has produced: the servants of God Monsignor Tomás Antonio Sanmiguel, first bishop of the diocese; Mother Israel Bogotá Baquero, Carmelite nun of Mother Candelaria; the housewife María Geralda Guerrero de Piñero; and the mother Lucia of the Child Jesus and the Holy Face, founder of the Barefoot Carmel in Venezuela.

The Church today needs Christians who are courageous witnesses of the Lord, who welcome with joy and perseverance the Word of God as the good news of salvation and renew with their baptismal vocation the youth of the Church and encourage with their commitment the transformation of the reality.

Witnesses who, in the face of such lies, injustice, and corruption, can respond to the cry of the young people and the poor who ask the Church like the psalmist: "Where is your God?" He exhorted.

"The new generations thirst for authentic Christians, who believe in what they announce and live what they believe," he said. Let us take our Christian condition seriously, let us imprint more strength and dynamism to our life of faith. It is not enough to be called Catholic Christians, we have to live as such, and that life must be reflected in our personal, family, social, economic and political behaviors.

Our people expect a more serious and coherent commitment with the small, with the poor, with the excluded, with those who suffer all kinds of abuse and humiliation in their body and soul. Are you waiting for more consistent work for peace, justice, human rights, fraternal coexistence, the integral development of man, he insisted? And he concluded by exhorting him to look back to Jesus, the Lord, the Witness par excellence (Ap. 1,5) and the "model of Christian witness".