Excerpt from the Catechism of the Catholic Church; Third part (Life in Christ); Second section (The Ten Commandments); Chapter Two (Love your neighbor as yourself); Article 7 (The Seventh Commandment); Subparagraph (I) (The universal destination and the PR 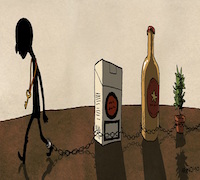 Excerpt from the Catechism of the Catholic Church; Third part (Life in Christ); Second section (The Ten Commandments); Chapter Two (Love your neighbor as yourself); Article 7 (The Seventh Commandment); Subparagraph (I) (The universal destination and the PR

2402 At the beginning God trusted the land and its resources to the common administration of humanity to take care of them, to dominate them through their work and to benefit from their fruits (cf Gn 1, 26-29). The goods of creation are destined for the whole human race. However, the earth is distributed among men to give security to their lives, exposed to hardship and threatened by violence. The appropriation of goods is legitimate in order to guarantee the freedom and dignity of the people, to help each one to meet their fundamental needs and the needs of those in their charge. It must make it possible to live a natural solidarity between men.

2403 The right to private property, acquired by work, or received from another by inheritance or gift, does not annul the original donation of the land to the whole of humanity. The universal destiny of goods continues to be paramount, although the promotion of the common good requires respect for private property, its right and its exercise.

2404 ‘Man, in the use of these goods, must consider the external things which he rightfully possesses not only as his own, but also as common, in the sense that they are to take advantage not only of him, but also of others ‘ (GS 69, 1). The property of a good makes its owner an administrator of providence to make it fruitful and communicate its benefits to others, first and foremost to their next.

2405 The goods of production-materials or intangibles-such as lands or factories, professions or arts, require the care of their owners so that their fecundity takes advantage of the greater number of people. The owners of goods of use and consumption should use them with temperance by saving the best part to the guest, the sick, the poor.

2406 The political authority has the right and the duty to regulate according to the common good the legitimate exercise of the right of ownership (cf GS 71, 4; SRS 42; CA 40; 48).