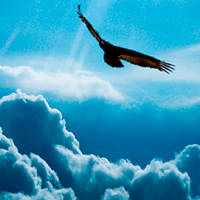 
Excerpt from the Catechism of the Catholic Church; Third part (life in Christ); Second section (The Ten Commandments); Chapter Two (love your neighbor as yourself); Article 7 (the Seventh Commandment); Point VI (The love of the poor).

2443 God blesses those who help the poor and reproves those who refuse to do so: ' Whoever asks for you, who wants you to lend something to him, do not turn his back on him' (Mt 5, 42). 'You received it for free, give it for free' (Mt 10, 8). Jesus Christ will recognize his elect in what they have done for the poor (cf Mt 25, 31-36). The good news 'announced to the poor' (Mt 11, 5; Lc 4, 18)) is the sign of Christ's presence.
2444 'The love of the Church for the poor... belongs to its constant tradition' (CA 57). It is inspired by the Gospel of the beatitudes (cf Lc 6, 20-22), in the poverty of Jesus (cf Mt 8, 20), and in his attention to the poor (cf Mc 12, 41-44). Love for the poor is also one of the reasons for the duty to work, to 'make a participant who is in need' (Ef 4, 28). It does not cover only material poverty, but also the many forms of cultural and religious poverty (cf CA 57).
2445 Love for the poor is incompatible with the untidy love of wealth or its selfish use:
Now, you rich weep and give shrieks for the misfortunes that are to fall upon you. Your wealth is rotten and your garments are moth mittens; your gold and your silver are taken from rust and your rust will testify against you and devour your flesh like fire. You have accumulated wealth these days that are the last. Behold: the wages which you have not paid to the workmen who reaped your fields are screaming, and the cries of the reapers have reached the ears of the Lord of hosts. You have lived on the earth gifted and have given yourselves to pleasures; you have fed up your hearts on the day of slaughter. You condemned and slay the righteous; he does not resist you (St 5, 1-6).
2446 St. John Crisóstomo remembers it vigorously: 'Not involving the poor from their property is stealing them and taking away their lives. What we possess is not our property, but it's own. 'It is necessary to satisfy the demands of justice before all so that it is not offered as a charitable aid what is already due to the title of justice' (AA 8):
When we give the poor the essential things we do not make personal liberalities, but we return what is theirs. Rather than performing an act of charity, what we do is fulfill a duty of justice. (S. Gregorio Magno, past. 3, 21).
2447 The works of mercy are charitable actions through which we help our fellow man in his bodily and spiritual needs (cf. Is 58, 6-7; Hb 13, 3). Instructing, advising, consoling, comforting, are spiritual works of mercy, as they are also forgiving and suffering from patience. Bodily works of mercy consist especially of feeding the hungry, giving shelter to those who do not, dressing up naked, visiting the sick and prisoners, burying the dead (cf Mt 25,31-46). Among these works, alms made to the poor (cf Tb 4, 5-11; If 17, 22) is one of the main testimonies of fraternal charity; It is also a practice of justice that pleases God (cf Mt 6, 2-4):
The one that has two robes deals them with the one who does not have; the one that has to eat does the same (Lc 3, 11). Rather in alms what you have, and thus all things will be pure for you (Lk 11, 41). If a brother or sister is naked and lacks daily sustenance, and some of you say, 'Go in peace, be warm or satiate,' but do not give them what is necessary for the body, what does it do? (St 2, 15-16).