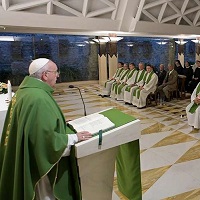 Praise to the Social Doctrine of the Church

Praise.  to the Social Doctrine of the Church

Fray Luis Carlos Bernal, op, doctrinal advisor of ACDE Uruguay offers praise to the wisdom, fairness, common sense and justice that is perceived in the Social Doctrine of the Church


In writing this eulogy I do not intend to make a harangue, a speech to inflame the spirit in favor of the Social Doctrine of the Church. Nor is this the heartfelt last words, with a farewell taste, uttered before the coffin of a loved one. My eulogy is of another sign. Nor do I intend to play the role of a leader who embraces the masses, nor do I dismiss a deceased, more or less known or more or less valued called Social Doctrine of the Church. This one's not dead, and I think he's got life for a while. His name may not prove to some graceful (for something, sometimes, it is called teaching, by a mania to the word Doctrine). John Paul II spoke many times of her and never introduced her to us as a dying lady, but as a master of wisdom.

The Social Doctrine of the Church has already many centuries of life and therefore of learning, experience, and wisdom. If we were to do their genealogy, we would have to go back to the time of creation. From that moment first-of which the book of the Genesis speaks symbolically-the woman and the male felt each other and Yahweh God commissioned them the care of the creation, to make it fruitful; of procreation;  to keep in balance all created so that it would remain a cosmos and not a chaos, and taught them to do it. From that moment on, male and female became friends, boyfriends, parents, businessmen and-also-in expert engineers, creators of balances to avoid chaos and maintain the cosmos.

After that assignment-we don't know how long it happened, or maybe much to know it-came the disaster, the sin. It doesn't matter what it was either. And again, we fell into chaos. Adam and Eve felt ashamed to be naked; Cain killed Abel. Men and women wanted to be like gods and tried to build the tower of Babel that-for not understanding each other-was unfinished. It was a monument to the misunderstanding among human beings.

Then came the prophets and the men of God, and denounced the greed, the robberies and the mistreatment of the poor, the injustice and our old and failed yearning to want to be like God. We never knew how to do it! Jesus of Nazareth-who was God and, also, man-again taught us to live together, to treat us as brothers, to care for creation, to be righteous, to manage wealth well. And, as a gift and a grace, he granted us to be children of God and brothers. But-as you know-his life didn't have, humanely, good luck. It didn't have a decent ending, according to people's thinking.

From the teachings of the early days of creation before misfortune, from the messages of the prophets, from the Gospel of Jesus: It was born that which we call (for nothing matters The name!) the Social doctrine of the Church. "From the Church" because it was the community of the disciples of Jesus with their pastors who elaborated this peculiar-Christian way of proceeding in political and social affairs.

Dear friends advisers-or if you prefer, to be more up to date, comrades-here ends my catechesis that many of you-I take it for granted-know it too much. If I have reminded you of all this is because again, unfortunately, we suffer-in my opinion-in the world fratricidal situations, dislocated pretensions to want to be like gods, shameful cares of power at the price, injustices, visceral difficulties for know how to forgive, usurp alien rights, messianisms without consistency and other chaotic attitudes.

I know many men and women-Christians or not, whether it is their belief or unbelief, that the names, in short, do not matter that they are of this condition and disposition, that their conduct is in accordance with the values of the Gospel of Jesus and with the reflection that the Church believer and faithful have been making, over time, the Word of God to man.

I recognize the success of the first men and women of ACDE, open to the future, when they chose the Social Doctrine of the Church as a criterion of lifestyle and business action. To my knowledge and understanding, they were right. Don't you think? We have to follow his fingerprints. At least, I think so.