We offer an article by Omar Ebrahime published by the Cardinal Van Thuan International Observatory on the Social Doctrine of the Church, in which he addresses the post synodic exhortation for Africa. 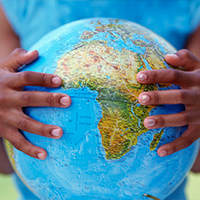 Africa and the Social Doctrine
We offer an article by Omar Ebrahime published by the Cardinal Van Thuan International Observatory on the Social Doctrine of the Church, in which he addresses the post synodic exhortation for Africa.

ROME, Friday 2 March 2012 (ZENIT.org) .-
*****
As the Observatory documented, in the course of the trip to Benin, last November, Pope Benedict XVI promulgated the second Post-Synodic Apostolic Exhortation devoted entirely to Africa (after the Ecclesia in Africa of John Paul II, in 1995).

The pontifical document, addressed to the episcopate, to the clergy, to consecrated persons, and the laity, this time has as its objective the Church in Africa at the service of reconciliation, justice, and peace.

The publication continues, in effect, collecting and synthesizing magisterially, the work of the Second Special Assembly for Africa of the Synod of Bishops, held in the Vatican, from October 4 to 25, 2009, and dedicated specifically to analyzing the challenges that the Christian community lives today in a continent always torn by ethnic, tribal and religious conflicts.

Articulated in a general introduction and two thematic parts (the first dedicated to the service of the Church to the cause of justice and peace, the second to concretely pursue of the common good) the exhortation is presented, and the Pontiff emphasizes it, in full continuity with the document of Pope John Paul II, which was moved by the fundamental requirement of the new evangelization.

Today too, to solve the most urgent needs of Africa, it is necessary first of all for a Church to discover its native dimension, authentically missionary, and that merges its action in the primacy of God over the world or the conscious deepening of the Theologian virtues of faith and hope.

Significantly, the pontiff should take the opportunity to return to the legacy of Pope John Paul II and return to the sources of faith: it is an indication not only of form but also of essence, at a time when the pastoral care of the Church in Africa is frequently considered the same as an aid society.

It is not that this is not important, but that without a clear hierarchy of priorities, the risk is to continue - or better, 'agree' with the various currents of the world of which the least that can be said is that they certainly do not have Christ as Lord. To avoid misunderstandings, the Social Doctrine returns fully to this priority.

The pontifical document stands out, in fact, from the continuous references to the social Magisterium of the Church that is considered the "unique moment of the [missionary] announcement: is it service to the truth that liberates (p.22).

At the bottom of the page, the Pope refers to the Caritas in Veritate, to say almost that this is the indispensable prologue of the study document dedicated to Africa. A non-distracted eye shows the intrinsic circularity of the Magisterium of Peter in which we have everything and each pronouncement again logically refers to another, according to a significant pedagogical methodology, which does not seek to make 'audiences' but seeks the truth even when an effort to explain it and make it accessible to contemporary humanity.

Returning to Africa, for Pope Benedict XVI it is no longer time to conform to the mentality of the world, the Pontiff clearly writes: The contribution of Christians in Africa will be decisive only if the intelligence of the faith becomes the intelligence of reality (p.32), that is, if the small local communities are able to achieve education, culture, morals, even shared politics, the Gospel of liberation announced and brought to fulfillment by the Lord once and for all in Golgotha.

Thus, if on the one hand there is no Christian life without sacraments (for Christians, the social reconciliation, "the pontiff writes that is born first of all for sacramental reconciliation), on the other hand, he does not need to forget the task, also essential, of the evangelization of the world of contemporary African culture (p.37)

And the first place where you learn to evangelize is the family, in which what is received is experienced and concretely experienced, in every day, that even an extraordinarily complex and articulated topic such as 'peace' is appreciated. in the walls of the house: in a healthy family life, experience is made of some fundamental components of peace: justice and love between brothers and sisters, the role of authority expressed by parents, the loving service of weaker members whether they are small or sick or elderly, the reciprocal help in the necessities of life, the readiness to welcome the other and, if necessary, forgive him. Why is the family the first and irreplaceable peace educator? (p 43)

In the second part of the exhortation, Pope Benedict XVI addresses the particular categories of people that make up African society and in each of these stops on the importance of learning and disseminating the social doctrine of the Church.

Thus, for example, to the misery the Pope recommends [be formed] in the catechism and in the social Doctrine of the Church to possess the principles that will help them to act as true disciples (p.59) While relatively young people (who in Africa, contrary to Europe, are the majority), Benedict XVI invites them to put Jesus Christ at the center of his whole life through prayer, but also through [...] of the formation in the Social Doctrine of the Church (p 63) and this because the Social Doctrine is first of all the matter of the laic and of those who have the enthusiastic mission of ordering the temporal realities to the kingdom of Christ.

Who sees temptations of fundamentalism, the Pontiff responds that the primacy of the social doctrine is none other than the fruit of that conception of integral human development that Pope Paul VI had already announced in the Populorum Progressio: the Church, in short, variously of political or social ideologies, cares about the whole man, not only on one part (since it is important), and it is only in light of this criterion of judgment that evaluates from time to time the real cover of the so-called ' progress.

For this reason, to make a particularly illuminating example, if the project to eliminate the death penalty for 'the living' in Africa and every part of the world appears laudable, one cannot say so much of the attempt (frequently sponsored by them) to introduce it, or aggravate it, for the unborn. To quote Pope Paul VI (also taken up by the Caritas in Veritate), the Church cultivates the constant concern of the development of each man and all man (p.70).

In the same way, epidemics such as AIDS also need a moral and ethical approach that currently does not seem to indicate in many of the scholars and workers of the sector, prisoners of a materialistic vision of the person: sexual abstinence, rejection of the anti-value of the promiscuity and conjugal fidelity enter into effect in the same integral human development that resides, in the last analysis, on an anthropology anchored to the natural right and illuminated by the Word of God and by the teaching of the Church (p.72) Here you can observe well as the crisis that inverts contemporary humanity European as the African. Is it ultimately a crisis of education. (p.75)

To be able to tell the man how to act, it is necessary first to know who the man is and where he comes from. Thus, even a question judged sometimes with 'idle' sufficiency in the Western world as that of the existence of God (or the soul) can contribute in a decisive way to guide a society and an economy that are truly friends of man and his service.

Obviously, at the basis of the pontifical exhortation, a high conception of the social Magisterium that has dignity and value as such, independently of the schools of economy or market that go by the majority, from the moment that its words of truth in him who is the incarnate truth, this is Jesus of Nazareth.

It is nothing other than the lordship of Christ in the world, in other words, the social Kingdom, where the adjective connotes not a class or particular dimension but a truly universal, then interclass naturaliter, referring to the entire design of creation. One would say that the Pope flies high. But the proper dimension of Christianity, from birth, is this. For less than this, the Fathers of the Church, so loved by Pope Benedict XVI, would have said, and would not even have been incarnated.