Message from the Pope to the Pontifical Academy of Social Sciences 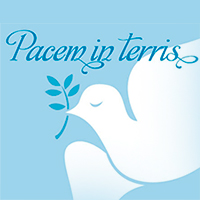 La Pacem in Terris, knock for the Church-World dialogue

Message from the Pope to the Pontifical Academy of Social Sciences
By: | Source: zenit.org

VATICAN CITY, Wednesday, May 2, 2012 (ZENIT.org) .- The plenary session of the Pontifical Academy of Social Sciences met these days in Rome to study the contribution of the encyclical "Pacem in Terris" to the social doctrine of the Church, on the 50th anniversary of its publication.

In the middle of the Cold War and when public opinion was raising the issue of the proliferation of weapons of mass destruction, John XXIII wrote an 'open letter to the world'; a pressing call to promote the cause of peace and justice in all social, national and international spheres. This was recalled by Benedict XVI in a message, published on April 30, and addressed to Mary Ann Glendon, president of the Pontifical Academy.

"Although the world political scene has changed in the last half-century - says the Pope - the vision of John XXIII has much to teach us even now, when we face new challenges for peace and justice in the era of after the Cold War, in the midst of the continuous proliferation of weapons.

The Pacem in Terris was and is a strong knock to participate in a creative dialogue between the Church and the world, between believers and non-believers, as the Second Vatican Council set out to promote.

The encyclical gives a completely Christian vision of the place of man in the cosmos, trusting that, in doing so, it offers a message of hope to a world hungry for it. It is a message that can reach people of all beliefs and none because their truth is available to everyone.

In that same spirit, after the terrorist attacks that shook the world in September 2001, John Paul II insisted that there can be no 'peace without justice, no justice without forgiveness'. The notion of forgiveness must find its way into the international discourse on the resolution of conflicts, to transform the sterile language of mutual recrimination that leads nowhere. If the human creature is made in the image of God, a God of justice but rich in mercy, these qualities must be reflected in the resolution of human affairs. Forgiveness is not a denial of error but a participation in the healing and transforming the love of God that reconciles and restores adds the papal message.

Historical errors and injustices can be overcome only if men and women are inspired by a message of recovery and hope; a message that points out a way out of the abyss in which people and nations are so often locked up, unable to break out of the vicious circle of violence. Since 1963, some of the conflicts that then seemed insoluble went down in history. With that perspective, we fight for peace and justice in today's world, trusting that our common search for the order established by God, in a world in which every human being enjoys the respect due to him, can give and give fruits, concludes Benedict XVI.