Message from the bishops of the 162 Permanent Commission of the Argentine Episcopal Conference on the commitment of the Christian citizen. 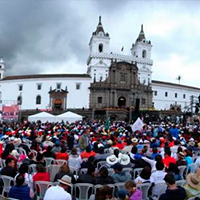 The Civil code and our lifestyle
Message from the bishops of the 162 Permanent Commission of the Argentine Episcopal Conference on the commitment of the Christian citizen.

"To make requests, prayers, supplications and thanksgivings for all men, for the sovereigns and all the authorities, so that we may enjoy peace and tranquility, and lead a godly and dignified life" (1Tim. 2, 1-3).

“We want to be Nation”, is what we have been praying together because we are aware that the Lord has given us an immense gift: our Homeland; and he has left us a task: the construction of our nation. Today the bishops want to make a call to renew our citizen commitment by collaborating in the debate on the reform of the Civil Code. We want to contribute to better legislation for all.

2. The importance of reform

This, like other recent or ongoing legislative reforms, affects our culture and our daily lives; It projects changes that touch us closely. According to the Civil Code that is punished, questions such as: when does a human being begin to have the right to call themselves a person? What is the point of legally constituting a family? What respect do we have to consider women, especially the most vulnerable? What can parents leave their children when they die? Will children conceived in laboratories be entitled to identity? Can children of dead people be conceived?

3. Function and effects of the Civil Code

The Civil Code regulates rights linked to personal life, matrimonial, family, social, economic, all of us. It expresses in some way the form and lifestyle that we as a society want to promote. It has, therefore, a pedagogical function and very long-term effects. We could say: tell me how you legislate and I will tell you what society wants. The sanction of a new Civil and Commercial Code is surely the most important legislative reform of the last decades by the variety of issues involved and by the entity of some of the proposed changes. That is why we agree with the claim of academies, professional colleges, universities, churches and other people and institutions that are rightly asking for the discussion in Congress to be granted as long as necessary. It would also be appropriate to conduct public hearings in each province.

The proposed reform contains positive aspects; however, we need to reiterate the concern about some issues of fundamental importance. The family model projected by these standards expresses an individualistic tendency and opposes the evangelical criteria and also to fundamental social values, such as stability, commitment on the other, the sincere gift of self, fidelity, respect for own life and foreign, the duties of the parents and the rights of the children.

If this project is approved unchanged, some human beings in gestation will not have the right to be called people. Motherhood and paternity will be disfigured with the so-called procreational will; it will legitimize, on the one hand, the promotion of the rent of bellies that treat women and on the other, the freezing of human embryos for an indefinite time, being able to be discarded or used for commercial and research purposes. Those who are conceived by artificial fertilization will be discriminated against, in their right to identity, because they will not be able to know who their mother or their biological father is. Spouses who join in marriage shall have no legal obligation to be faithful or to live together under one roof; marital affective ties will be weakened and devalued.

We want a society in which stable links are encouraged and where priority is given to the protection of children and the most helpless. The desires of adults, even if they seem legitimate, cannot be imposed on the essential rights of children. As adults, we have more obligations than rights. We need to recognize and give legal protection to all human life from conception, and to remember that not everything scientifically possible is ethically acceptable.

5. The role of religious faith in political debate

Benedict XVI has repeatedly taught that the justice of the laws and the actions of government has its foundation in objective values, that the man can know guided by his reason. The role of religious faith is to help reason so that it clearly discovers these moral principles and applies them righteously. That is why we Catholics have not only the right, like any citizen but also the obligation to make our contribution to the public debate. We want to propose and be heard.

6. An opportunity to act all in the good of the nation

Therefore, the hour calls upon the Christians the personal and community testimony of Jesus Christ to shine in the midst of men the love of God, which is the true foundation and model of human relations. The proposed reforms, together with others already produced or in the process of legislative treatment, strongly challenge the Church. To us as pastors. To mothers and parents, who will have to live their marriage even more committedly and to train their children in the Gospel values and the truth about the person, with a lucidly critical look at what surrounds us. To the priests, deacons, consecrated and catechists, who must communicate these contents and vital compromises with their word and testimony. To schools and teachers, called to accompany and support parents in this difficult task with coherence and courage. Health professionals who may be faced with situations where they have to decide in conscience. To the lawyers and judges, called to defend the justice and the good of the person in all the situations that are presented to them.

We make a particular call to legislators to fully assume their responsibilities, thoroughly study the proposed reforms, be true to the heritage and traditions of the fatherland, and be open to listening to all the voices that have something to say to the respect. And finally, that they do not stop listening to the voice of their conscience, avoiding that the legitimate partisan belongings lead them to vote against or outside of that one.

8. Call for prayer and reflection

We invite the parishes, educators, institutions, and movements to organize in the coming weeks a day of prayer and reflection. In community we can pray to God, Father of all good, Jesus Christ the Lord, and the Holy Spirit, Lord, and giver of life. Let us ask you to bless our country and enlighten our legislators and rulers, granting the wisdom necessary to work for peace, social friendship and the defense of all people, privilege the poorest and weakest. Let us do so in the likeness of the first Christian community, intimately united, dedicated to prayer and reflection, in the company of Mary, the Mother of Jesus and our mother of Luján.

The Bishops of the 162 º Permanent Committee of the Argentine Episcopal conference
Buenos Aires, August 22, 2012