Featured
articles
Became poor to enrich our poverty
For your interest, we reproduce then the message of Pope Francis for Lent 2014, the first of his pontificate for this time of the Liturgy of the Church

That the Holy Spirit, thanks to which we "as poor, but who enrich many; as needy, but possessing all 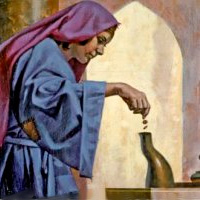 Became poor to enrich our poverty

For your interest, we reproduce then the message of Pope Francis for Lent 2014, the first of his pontificate for this time of the Liturgy of the Church

On the occasion of Lent, I propose some reflections so that they serve you for the personal and community way of conversion. I begin by recalling the words of St. Paul: "For you know the grace of our Lord Jesus Christ, who, being rich, became poor for you to enrich you with his poverty" (2 Cor 8, 9). The Apostle addresses the Christians of Corinth to encourage them to be generous and to help the faithful in Jerusalem who pass need. What do these words of St. Paul say to Christians today,? What does it say to us today, the invitation to poverty, to a poor life in the evangelical sense?

The grace of Christ
First of all, they tell us what the style of God is. God is not revealed through the power and wealth of the world, but through weakness and poverty: "Being rich, he became poor for you...". Christ, the eternal Son of God, equal to the Father in power and glory, became poor; He descended in the midst of us, approached each one of us; He undressed, was "emptied", to be in everything like us (cf. FLP 2, 7; Heb 4, 15). What a great mystery the incarnation of God! The reason for all this is divine love, a love that is grace, generosity, desire for proximity, and that does not hesitate to give and sacrifice itself for the creatures whom He loves.
Charity, love is sharing in all the fate of the beloved. Love makes us alike, creates equality, knocks down walls and distances. And God did this to us. Jesus, indeed, "worked with man's hands, thought with man's intelligence, working with the will of man, and loved with the heart of man, Born of the Virgin Mary, he became truly one of us, in everything like us except in sin» (Conc. Ecum. Vat. II, Const. past. Gaudium et Spes, 22).

Jesus' purpose in becoming poor is not poverty itself, but — says St. Paul — "... to enrich us with his poverty." It is not a play on words or expressions to cause a sensation. On the contrary, it is a synthesis of the logic of God, the logic of love, the logic of Incarnation and the Cross. God did not fall upon us salvation from the high, as the alms of those who give part of what is superfluous to him with apparent philanthropic piety.

The love of Christ is not this! When Jesus enters to the waters of the Jordan and becomes baptized by John the Baptist, he does not do because he needs penance, conversion; He does it to be in the midst of people, in need of forgiveness, among us sinners, and to bear the burden of our sins. This is the path he has chosen to comfort us, to save, to liberate ourselves from our misery. We are surprised that the Apostle says that we were liberated not by the riches of Christ, but through his poverty. And yet St. Paul is well acquainted with the "unfathomable richness of Christ" (Ef 3, 8), "heir to all" (Heb 1, 2).

So what is this poverty with which Jesus liberates and enriches us? It is precisely his way of loving us, of being close to ourselves, as the good Samaritan who approaches that man who had all left half dead at the edge of the road (cf. Lc 10, 25SS). What gives us true freedom, true salvation, and true happiness is his love filled with compassion, tenderness, which he wants to share with us.

The poverty of Christ that enriches us consists in the fact that he became flesh, carried away with our weaknesses and our sins, communicating the infinite mercy of God. The poverty of Christ is the greatest richness: the richness of Jesus is his unlimited trust in God the Father, is to be entrusted to him at all times, always seeking and only his will and his glory. He is rich as a child who feels loved by his parents and loves them, without hesitating an instant of their love and tenderness.

The richness of Jesus lies in the fact of being the Son, his unique relationship with the Father is the sovereign prerogative of this poor Messiah. When Jesus invites us to take his "yoke bearable", he invites us to enrich ourselves with this "rich poverty" and "poor wealth" of his, to share with him his filial and fraternal spirit, to become children in the Son, brothers in the Firstborn Brother (CFR Rom 8, 29).
It has been said that the only real sadness is not to be saints (L. Bloy); we could also say that there is one true misery: not to live as children of God and Brothers of Christ.

We might think that this "way" of poverty was that of Jesus, while we, who come after him, can save the world with the right human means. It's not like that. In all times and everywhere, God continues to save men and save the world through the poverty of Christ, which becomes poor in the Sacraments, in His Word and in his Church, which is a people of poor. God's wealth cannot pass through our wealth, but always and only through our poverty, personal and community, enlivened by the spirit of Christ.

In imitation of our Teacher, Christians are called to look at the miseries of the brethren, to touch them, to take care of them and to carry out concrete works to alleviate them. Misery does not coincide with poverty; misery is poverty without trust, without solidarity, without hope. We can distinguish three types of misery: material misery, moral misery, and spiritual misery.

The material misery is the one that we usually call poverty and touches those who live in a condition that is not worthy of the human person: deprived of their fundamental rights and necessities such as food, water, hygienic conditions, work, the possibility of development and cultural growth. In the face of this misery, the Church offers its service, its Diakonia, to respond to the needs and to cure these wounds that disfigure the face of humanity.

In the poor and the last we see the face of Christ; loving and helping the poor we love and serve Christ. Our efforts are also aimed at finding ways to stop the world from violations of human dignity, discrimination, and abuse, which in so many cases are the source of misery. When power, luxury, and money become idols, they take precedence over the demand for a fair distribution of wealth. It is, therefore, necessary that consciousness is converted to justice, equality, sobriety, and sharing.

It is no less worrying about the moral misery, which is to become slaves of the vice and the sin. How many families live in distress because some of their members — often young — have a dependence on alcohol, drugs, gambling, or pornography! How many people have lost the meaning of life, are deprived of prospects for the future and have lost hope! And how many people are forced to live this misery by unjust social conditions, for lack of a job, which deprives them of the dignity that gives the bread home, for lack of equality concerning the rights to education and health? In these cases, the moral misery could well be called almost incipient suicide.

This form of misery, which is also a cause of economic ruin, is always linked to spiritual misery, which strikes us when we move away from God and reject his love. If we consider that we do not need God, that in Christ he tends our hand, because we think that we are sufficient for ourselves, we are headed for a path of failure. God is the only one who truly saves and liberates.

The Gospel is the true antidote to spiritual misery: in every environment, the Christian is called to carry the liberating announcement that there is forgiveness of evil committed, that God is greater than our sin and he loves us free, always, and that we are made for communion and eternal life. The Lord invites us to proclaim with joy this message of mercy and hope!

It is beautiful to experience the joy of spreading this good news, of sharing the treasure that has been entrusted to us, to comfort the afflicted hearts and to give hope to so many brothers and sisters plunged into the void. It is about following and imitating Jesus, who was in search of the poor and sinners as the shepherd with the lost sheep, and he did it full of love. United to him, we can boldly open new paths of evangelization and human promotion.

Dear brothers and sisters, may this time of Lent find the whole church ready and willing to testify to those who live in the material, moral and spiritual misery the evangelical message, which is summed up in the announcement of the love of the merciful Father, ready to hug each person in Christ. We will be able to do so as we conform to Christ, who became poor and enriched us with his poverty.

Lent is an appropriate time to shed, and it will do us good to wonder what we can deprive ourselves of to help and enrich others with our poverty. Let's not forget that true poverty hurts: a plundering without this penitential dimension would not be valid. I distrust the alms that does not cost and does not hurt.

That the Holy Spirit, thanks to which we "[are] as poor, but who enrich many; as needy, but possessing all " (2 Cor 6, 10), sustain our purposes and strengthen in us the attention and responsibility to human misery, so that we may be merciful and agents of mercy. With this desire, I assure my prayer for all believers. That each ecclesial community has a profitable walk through the Lenten path. I ask you to pray for me. May the Lord bless you and the Virgin will keep you.