Featured
articles
Conceptual key: Charity
Charity is the bond of communion of the Church and finds in the Eucharist its sacrament 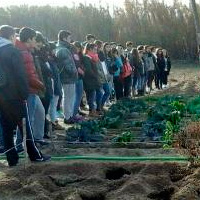 Conceptual key: Charity
Charity is the bond of communion of the Church and finds in the Eucharist its sacrament


Is the love in the Christian sense ("apape-caritas") that constitutes the very essence of God revealed by Jesus Christ (cf. 1 Jn 4.8). This is to deliver one's life (Jn 15.13). The perfect form of charity is the gift of Christ on the Cross (Ga 2.20). The Cross is the "figure" and the symbol of love: in it, Jesus fulfills the double commandment of the love of God and to → neighbor, retaken of the ancient Law (Torah) (cf. Mc 12, 28SS; Dt 6.5; Lv 19.17). On the cross, Jesus wholly loves God the Father, entrusted in his hands (Lk 23.44), and the neighbor, → forgiving his enemies (Lk 23.26).
True love or charity is to love with → gratuitousness, also to those who do not deserve it, the sinner, the wicked, the traitor, the enemy (cf. Lc 6.32: Rm 5.11). This divine love, unique and transcendent, is not "utopian" to human beings. It becomes reality when the Gift of the risen Lord is poured out into the hearts of men through the power of the Holy Spirit (cf. acts 2; Rm 5.5) and makes it possible to forsake the love of Christ. Such is the experience of saints and martyrs (cf. acts 7,59-60). Charity is therefore a theological virtue, that is, supernatural and pneumatológy.
Saint Paul considers it the greatest of the gifts of the Holy Spirit and describes it thus: "Charity is patient, it is helpful; charity is not envious, it is not boastful, it is not engry; It is decorous; it does not seek its interest; Not irritated; It does not take into account the evil; it does not rejoice in injustice; it's happy with the truth. All the excuse. Everything believes it. Everything is waiting. Everything supports it. Charity never ends. " (cf. 1 Co 13, 4-8). Charity can be considered the work of → faith (cf. Ga 5.6). Owning love is a sign of a new life that beats death: "We know that we have passed from death to life because we love the brothers. The one who does not love remains in death "(1 Jn 3.14).
The whole Christian tradition has revered it as the "queen of virtues." She consists, for S. Augustine, in the love of the things that must be loved ("dilectio rerum amandarum") and gives precedence the common things to those own ("caritas communion propriis non propria communibus anteponit"). Charity is "ordained": she make love to God for himrself; she inspires a righteous love of herself (remembering the own filial dignity); she stimulates to love the neighbor in God and the enemy because of God ("caritas est amicum diligere in Deo et inimicum diligere propter Deum", S. Gregorio Magno). Charity loves according to the inordinate measure of God ("mode sine mode", S. Bernardo). For Saint Thomas only charity truly deserves the name of grace because it is the only one that "makes God pleasing" ("nomen gratiae meretur ex hoc quod gratum Deo facit").
She possesses the power to transform the lover into the beloved, because raises a kind of "ecstasy", a coming out of themselves to adhere to the beloved ("caritatis proprium est transforme amantem in amatum, quia Ipsa est quae extasim facit").
Charity is the bond of communion of the → Church and finds in the Eucharist its sacrament. Through charity the Spirit gathers the faithful under one body: the same Spirit unifies the body with its presence, with its strength and with the internal connection of the members, produces charity among the faithful and pushes to live it. Therefore, if a member has suffered, all members suffer with it; or if a member is honored, they enjoy together all members (cf. 1 Co 12.26; LG 7.3). A charity can be neither confusing nor much less replaced by the notion, not peculiarly, Christian of → solidarity. This consists of the human and social order of universal fraternity. Instead, charity is the relationship of communion itself of → Christian fraternity. She has a universal propulsion (even embracing enemies), but is especially enriched by reciprocity in the ecclesial community: "For this is the message you have heard from the beginning: that we love one another" (1 Jn 3,11-12); "So as long as we have opportunity, let us do good to all, but especially to our brothers in faith," (Ga 6.10).
Together with the → Evangelization and intercession (Liturgy), the testimony of charity represents the main Christian way of carrying out the mission that Christ has entrusted.