Featured
articles
Conceptual Key: Reconciliation
Fr. Rossetti, offers us a series of illustrative fragments that allow us to deepen Christian in the notion of reconciliation. 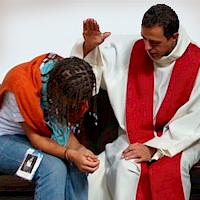 Conceptual Key: Reconciliation
Fr. Rossetti, offers us a series of illustrative fragments that allow us to deepen Christian in the notion of reconciliation.

This is the recovery of a bond of friendship or alliance that had been lost because of the sin or betrayal of one of the parties. In particular, restoring a broken relationship usually happens by asking and giving → forgiveness. In the NT (above all in Pauline theology) reconciliation implies three levels: with God, with himself, with others and with the world. The first reconciliation concerns the relationship between humanity and God. It takes the initiative of peacemaking and performs it through Jesus Christ, in which God condemns sin and justifies sinners (2 Co 5,18-21). Reconciliation is equivalent therefore to justification and peace with God (cf. Rm 5, 1s). From the moment Christ dies on the Cross, God no longer sees humanity as sinful and disobedient, but only the man Jesus who in the Name of all mankind fulfills the act of obedience and perfect love. His Yes has covered and swallowed all the non-sinners (cf. 1 co 15.54; 2 Co 1.20). The personal dimension of reconciliation consists in the fact of making received, after the forgiveness of sins, not "a spirit of slaves to relapse into fear", but "a spirit of adoptive children that makes us exclaim Abba, Father! The spirit itself joins our spirit to testify that we are children of God "(Rm 8,15-16); "For the Lord did not give us a spirit of shyness, but of Fortitude" (2 Tm 1.7). The true reconciliation of man with himself is given in the discovery of his own filial identity with respect to God. Adoption, salvation and reconciliation fit. But reconciliation also has a "horizontal" and cosmic dimension. Through Jesus ended the ancient order that established the enmity between Jews and Gentiles. The Sacrifice of Christ abate every "wall of separation"; The love extended over the cross nullifies any division between humans (cf. Ef 2.14; Ga 3.28). The peace obtained through the "blood of his Cross" (Col 1.20) extends to the whole universe. In this new "eone", which the church anticipates as Mundus Reconciliatus (Augustine), one can enter "being reconciled with God", welcoming the gospel which is the "word of Reconciliation" (2 Co 5.20, → Evangelization). Jesus indicates the reconciliation with the adversary as a priority condition to appear before the Altar of God (Mt 5.24). It seals the recovery of communion through forgiveness and therefore it is as such, a pleasing sacrifice to the father (cf. Mt 9.13; Os 6.6