The victory over indigence 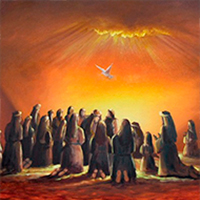 Material poverty is the condition of deprivation of goods, of success, of security. The OT does not consider such an enviable situation since → prosperity is considered a visible sign of the divine blessing (cf. Dt 15,4). The Law of the Lord assured the poor (stranger, orphan, widow) the right to be judged impartially (see Lv. 19:10), to benefit from the clusters of crops (Lv. 23,22), to enjoy loans without interests (Lv. 25,36), of preserving a vital minimum (Lv. 24,12); in a word, of the generosity of the Israelites (Dt 15,11).

The prophets emphasize the demands of justice and fraternity contained in the Torah. Thus, helping the needy is equivalent to true fasting (Is. 58,6-7) and compassion for true worship (Hos 6,6).

Jesus is the true heir of the Old Testament tradition. He emphasizes that by donating to the poor, he lends himself to God (cf Pr 19,17; Mt 19,21); that spiritual poverty is the just attitude for salvation (cf the anawîm, of So 2,3, Mt 5,3). But both emphases are, so to speak, connoted Christologically in the sense that Jesus himself is the true and perfect poor; he who has no place to rest his head (cf. Lk 9,58); that he has become poor in order to enrich us with his filial humility (2 Corinthians 8: 9), surrendering himself to all in mercy (Phil 2: 6ff). After Christ - par excellence the Poor of the Lord (cf Mt 11,29) - is his mother, Mary, whom the NT presents as the emblem of human poverty benefited by divine wealth: the Magnificat exalts the inclination of God on the "humility of his servant" and sings the justice that changes the lot: "He filled the hungry with good things and dismissed the rich with nothing" (Lc 1,48,53).

The victory over indigence. The ideal description of the first Christian community says: "The multitude of the believers had but one heart and one soul." No one called their property, but everything was in common among them ... There was no one among them no needy, because all those who owned fields or houses sold them, brought the amount of the sale, and put it at the feet of the apostles, and distributed to each according to their need "(Acts 4, 32-35). We want to document the possibility of overcoming material poverty through spiritual poverty and communion. The true Christian sharing depends on these conditions: the consciousness of not being able to serve both God and Mamona, being the attachment to money "root of all evils" (Mt 6,24, 1 Tm 6,10); a new style of life marked by sobriety (nêpsis) that knows that everything is a gift from God (1 Cor 4: 7), and that "we have not brought anything to the world and nothing we can take away from it. And dressed, we will be happy with that "(1 Tm 6,7-8); the awareness of being "members of one another" (Rom 12: 5), and therefore of having a reciprocal debt of charity and fraternal sharing (cf. Rm 13,8); the eschatological certainty that what is done to the poor is done to Christ himself (Mt 25,32ff).

The vow of poverty. Poverty is also next to obedience and chastity, one of the three vows professed by those who embrace consecrated life. He testifies above all to "God as true wealth of the human heart" and answers prophetically the society of consumption and opulence that cries out atrociously with the misery of so many populations. The life of the religious will, therefore, tend to "preferential love for the poor and will particularly manifest itself in sharing the conditions of life of the most disinherited" (VC 90).