Featured
articles
Conceptual key: Sin
Fragments of Church documents in which the sin is spoken and the free and voluntary transgression of the order established by God 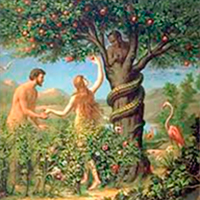 Conceptual key: Sin
Fragments of Church documents in which the sin is spoken and the free and voluntary transgression of the order established by God

"In its essential meaning, sin is a denial of what God is-as a creator-in relation to man and that which God wants, from the beginning and forever, to man. By creating man and woman in their image and likeness, God wanted for them the fullness of good or the supernatural happiness that springs from participation in his life itself. Sinning, man rejects this gift and simultaneously wants to be himself ´as gods, connoisseurs of good and evil ´ (Gn 3.5), i.e., deciding good and evil independently of God, his creator... Sin provokes the rupture of the unity originating from that which man enjoyed in the original state of justice: the union with God as the source of the inner unity of his own ´I´, in the reciprocal relationship between man and woman (communion of person), and finally, in relation to the outside world, with nature" (MD 9). Sin commonly designates the free and voluntary transgression of the order established by God (cf. 1 Jn 3.4). "Original" sin leads to the existential ignorance of the fatherhood of God, which leads to self-centeredness and submission to concupiscence. This has existential characteristics such as vulnerability, fear, loneliness, selfishness. Sin enters the world suffering, misery, death. The man in sin lives in the "flesh", abandoned to himself, and forced to defend strongly the fragile life he possesses. Thus begins the submission to the concupiscence (cf. Ef 2.1-3), which reaches by propagation to all (DS 1512-1513). Sin has weakened and wounded human nature, but it has not destroyed it. Human dignity has been preserved in the free will that tends to good and persists also after sin, even if this is "attenuatum et inclinatum" (cf. Trento, DS 1521, 1525,1555). But sin, as the death of the soul, incapacitates to fulfill the good and imposes the slavery of the devil (cf. CIC 407). With the Parents (cf. P.E. origins, Ireneo) we can say that sin, without eliminating the "Image" (Eikôn) of God in Man, has denatured the "Likeness" (Homoiôsis).

Thanks to conversion and justification, man is given the possibility of "sin no more" (cf. 1 Jn 3, 6.9), that is, of not being more subjected to the tyranny of selfish passions. The spirit thus restores the "likeness" of man to God.

The recent magisterium underlines that together with personal sin there are also structures of sin. These "are founded on personal sin and, therefore, are always linked to concrete acts of people, who introduce them, and make it difficult to eliminate them. And so these same structures are reinforced, disseminated and are the sources of other sins, conditioning the conduct of men. ´Sin´ and ´structures of sin´ are categories that do not often apply to the situation of the contemporary world. However, we cannot easily reach a deep understanding of the reality that we have before our eyes, without naming the root of the evils that afflict us" (RP 16 = SRS 36). If the priestly mission of the Church is to forgive the sins, its prophetic mandate leads it to denounce the structure of sin, and its social mission impels it to create new structures of the common good (HM, 25).