Featured
articles
9 Biblical Passages that Will Help You Discern God's Plan
Some tips from the Holy Scriptures that can help you know what God wants from you. 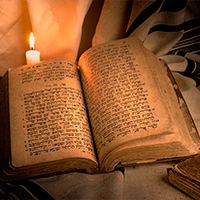 Whether you want a new job, if you're thinking about what colleges to apply for, whether you're deciding whether or not to have another child or maybe you're wondering if it's time to go back to school (among other things).  The process of making a decision can be confusing and really tiring.

Thinking about making this process a little bit more bearable, we've taken some tips from the Holy Scriptures that can help you put yourself in the presence of God and can give you some lights to know what God wants from you.

Before you start you should know two things:

Having these things in mind will help you shorten the list of alternatives and focus specifically on the ones that are good. Remember, there's no need to rush. Choose a quiet place to hear what God tells you through his word. Discernment takes time and especially time listening, listening a lot. Be patient and confident that God always wants what's best for you.

Invite the Holy Spirit to be the one to direct your prayers through the following passages:

2.Throw cries of joy, daughter of Zion, throw clamores, Israel, rejoice and exulta with all your heart, daughter of Jerusalem! (Telephones 3, 14-20)

3…. He has withdrawn Lord the sentences against you, has alienated your enemy. Lord, King of Israel, is in the midst of you, you will no longer fear any evil! That Day you will say to Jerusalem: Do not be afraid, Zion, do not faint your hands! Lord your God is in the midst of you, A Mighty Savior! The exultation of joy for you, renew you for your love. Dance for you with shouts of jubilation, as in the holidays. I'll take away from you the misfortune, the disgrace that weighs on you. Behold, I will make extermination of all your oppressors, in the time and I will save the lame and pick up the wayward one, and make them have praise and renown in all the countries where they were mistaken. At that time I'll make you come, at that time I will gather you. Then I will give you renown and praise among all the peoples of the Earth, when I return your captives to your own eyes, says Lord.

Before I formed you in the womb, I knew you, and before you were born, I had you consecrated, I prophet of the nations (Jeremiah 1, 4-10)

4,.. I said: "Ah, Lord! Look I can't express myself, I'm a boy." And Lord said to me: Do not say, "I am a lad," for wherever that I send you go, and all that I command you shall say. Do not be afraid, that with you I am to save you oracle of Lord. Then He lengthened Lord his hand and touched my mouth. And Lord said To me: Look I've put my words in your mouth. From today on I give you authority over the people and the kingdoms to remove and destroy, to lose and overthrow, to rebuild and plant.

5… He was on the shore of Lake Gennesaret and people crowded on him to hear the Word of God, when he saw two boats that were on the shore of the lake. The fishermen had come down from them, and washed the nets. Going up to one of the boats, which was Simon's, he begged him to move away some land. And, sitting down, he taught from the boat to the crowd. When He had finished speaking, he said to Simon, "Go to sea, and cast your nets to fish". Simon replied: "Master, we have been struggling all night and we have not caught anything; but in your word, i'll throw out the nets". And, doing so, they caught a lot of fish, so the nets threatened to break. They beckoned the companions of the other boat to come to his aid. They came, then, and filled the two boats that were almost sinking. At the sight of Simon Peter, he fell to Jesus' knees, saying, "stay away from me, Lord, that I am a sinful man". For the astonishment had seized him and of how many with him were, because of the fish that had fished. And the same of James and John, sons of Zebedee, who were Simon's companions. Jesus said to Simon, Don't be afraid. From now on you'll be a man's fisherman". They brought ashore the boats and, leaving everything, followed him.

What fell in good soil, are those who, after hearing, keep the Word with good and righteous heart, and bear fruit with perseverance (Luke 8, 15)

6.Many people having assembled and coming to him from all the cities, he said in a parable: "A sower came out to sow his seed; and when he sowed, a part fell along the way, was trodden on, and the birds of the sky ate it; another fell on stone, and after sprouting, dried, for not having moisture; another fell among thorns, and the thorns grew with it, they choked it. And another fell on good ground, and growing it bore fruit a hundredfold. " Saying this, he exclaimed: "He who has ears to hear, let him hear." His disciples asked him what this parable meant, and He said: "It has been given to you to know the mysteries of the Kingdom of God; to others only in parables, so that seeing, they do not see and, hearing, they do not understand. The parable means this: The seed is the Word of God. Those along the way, are the ones who have heard; then the devil comes and takes the Word from his heart, lest they believe and be saved. Those on stone are those who, upon hearing the Word, receive it with joy; but these have no root; they believe for some time, but at the time of the test they give up. What fell among the thorns, are those who have heard, but throughout their journey they are drowned by worries, riches and pleasures of life, and do not reach maturity. What fell on good ground are those who, having heard, keep the Word with a good and upright heart, and bear fruit with perseverance.

"Behold the Lamb of God" The two disciples heard him speak like this and followed Jesus. Jesus turned, and seeing that they followed him he says, "What do you seek?" (John 1, 36-38)

7.The next day, John was again there with two of his disciples. Looking at Jesus as he passed, he says: "Behold the Lamb of God." The two disciples heard him speak like that and followed Jesus. Jesus turned around, and when he saw that they were following him he said: "What are you looking for?" They answered him: "Rabbi - what does he mean, Master - where do you live?" He replied: "Come and see." They went, then, to see where he lived and stayed with him that day. It was more or less the tenth hour.

And do not be accommodated to the present world, but rather be transformed by the renewal of your mind, so that you can distinguish what is the will of God: the good, the pleasant, the perfect (Romans 12, 1-2)

8.You also have patience; strengthen your heart because the coming of the Lord is close (James 5, 8)

Have, then, patience, brothers, until the coming of the Lord. Behold: the husbandman waits for the precious fruit of the earth awaiting him with patience until he receives the early and late rains. Have patience also; Strengthen your hearts because the Coming of the Lord is near. Do not complain, brothers, of one another not to be judged; see that the Judge is already at the door. Take, brothers, as a model of suffering and patience to the prophets, who spoke in the name of the Lord. Look how we proclaim happiness to those who suffered with patience. You have heard Job's patience in suffering and you know the end that the Lord gave him; because the Lord is compassionate and merciful.

Always be cheerful. Pray constantly. In all say thanks, for this is what God, in Christ Jesus, wants from you. (I Tesalonisenses 5, 16-18)

9.Do not extinguish the Spirit; do not despise the prophecies; Examine everything and stay with the good. Abstain of all evil gender. May He, the God of peace, sanctify you fully, and that all your being, the spirit, the soul and the body, be preserved without blemish until the coming of our Lord Jesus Christ. Faithful is the one who calls you and it is He who will do it.

Finally we leave a prayer for discernment:

Loving and merciful God, you have led me to desire your will, which often seems to go beyond my understanding. However, I know that you, who love me unconditionally, and will continue to put in my heart the desire to follow in the footsteps of your Son Jesus, who asks me to be His hands and feet, his eyes and his heart, in the midst of your daughters and your children. I want to love as much as Jesus loves and serve in the way you want for me. Grant me the yearning to be always in your presence so that your spirit can speak to my heart.  That I can answer with open hands and open heart to your calling, wherever you want to guide me. Grant me the courage to say as Mary "yes" to you in all things, and that I may have the passionate zeal of your prophet Elijah. In gratitude, with Your grace, all my life it will be lived for the realization of your kingdom on earth, for your honor and glory. Amen.