We are going to explore the core of what friendship is in Aristotle because we are interested in knowing what a good friend is so that we can have it or know that we already have it. 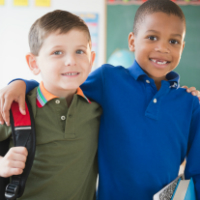 How to recognize the true friend
Beyond "Friendship in Aristotle"

We are going to explore the core of what friendship is in Aristotle because we are interested in knowing what a good friend is so that we can have it or know that we already have it.
By: Luis F. Hernández, L. C | Source: http://www.regnumchristi.org/Magazine In-Forme No. 54

In this short article, we will not summarize what Aristotle has written about friendship. Dozens of Spanish summaries of "friendship in Aristotle" can be consulted. It's very easy to find them with Google.

We are going to explore the core of what friendship is in Aristotle because we are interested in knowing what a good friend is so that we can have it or know that we already have it.

Let's give a definition. Friendship is the reciprocal and manifest benevolence (ενοια) between two people based on virtue.

For the Greek philosopher, virtue is a habit worthy of praise, strongly rooted in the person. The interesting thing is that Aristotle claims that it is not the same habit that a disposition. For example, it is not the same to be obedient to civil laws and therefore to have the habit of obedience, to have a certain inclination to obey, but which is not yet very strong. "Skipping a red light once a year does not hurt...". If someone acts like that we do not call him at all virtuous, because he who is virtuous has strong habits to work well.

And our philosopher says, "A habit is stronger and more durable than a disposition." While the obedient one always does, except rare exception, the one who obeys today without being very obedient does not offer guarantees to be so tomorrow, because who knows if he will want.

That's why authentic friendship is based on virtue because it can only be lasting. Friendship that is not forever cannot be a true friendship. For that, there are other words in Spanish: fellowship, camaraderie, sympathy, affection, appreciation, etc.

True friendship is based on good

No more theory. No one would worry to think about friendship if at the end of the day they were nothing more than political, psychological or religious speeches. The interest in friendship is that we all need it.

Only virtue is stable. The rest is carried by the wind: ambition, pleasure, taste, money or power. If you want to have a real friend you should be a good man. Only the man who lives doing well can stand firm in his decision. The one, who chooses to do evil, today does one thing and tomorrow is contradicted because evil always implies an internal division. And where there is division there is instability and where there is instability there cannot be a real friendship.

Seriously is there a friendship like this on this earth? I don't think so. We all know good men, but not so good that they don't ever fail. When we say that "Mike is good" we do not mean that Mike is good himself and that it has no glance of mistake. We mean he is usually good. He has a good habit to do well.

The big question is: how many Mikes exist in the world? And if there are, is one of them my friend? Or perhaps Mike is reading this writing right now?

Living according to good or virtue is something human. Neither dogs nor cats can be virtuous. And that is because virtue has one condition: that a free being chooses to be good.

So when it is said that "the dog is man's best friend," it means that the relationship between an owner and his pet is similar to human friendship and – hopefully – not the other way around. And the same goes for all of us who call friends, but who do not meet the conditions that we have said: they are "people we know" and therefore we call them "friends" because our relationship with them has a certain resemblance to friendship.
"Interested" friendships are not true friendships either, because they do not love the "friend", but their assets or their influence or even their grace... but not him or her in particular. The proof is that if, for any reason, he does no longer causes you interest, no longer has resources or is no longer funny; you stop talking to them and eventually forget them.

It makes sense to say that true friendship is based on good because we only love good things, we only love good and not evil. If we love something bad, it's because it's wrapped up in the mask of good, but without really being a good thing. Obviously, the hard part is to make a difference in what is good. And to know this math is not necessary: there have been good men in history that did not know or read; for example, before the writing was invented!

Speaking of good... What if a friend is wrong?

We started talking about friendship, and we ended up talking about good! And this is because you can't be friends with evil. Friendship is reciprocal. I can love the one who doesn't love me. That's called gratuity and benevolence, but not friendship. I can love a person who looks good, but it's not. That is a great act of benevolence, but it cannot be a friendship. It should not surprise any reader the following: if one day someone who claims to be your friend comes and asks you to do something improper, the true friend not only will not do what he asks but will correct the other person. If you are interested in your friend and not the advantages you can get out of your relationship with him, then you will want his good and not a mere appearance of good.

St. Augustine wrote: "You can work many things that look good and do not come from the root of love. Thorns also have flowers: some things seem rough, some seem harsh, but they are made for education under the dictation of love. Once and for all you are given a brief precept: love and do what you want; if you shout, shout with love; if you correct, correct with love; if you forgive, forgive me with love. When the root is within love, from foundation there can be nothing more than good."

After all that has been said no wonder that true friendship is like diamonds in the world: precious and perhaps scarce. Not for nothing, Cicero wrote that "those who suppress the friendship of life are as if they set aside the sun of the world."