Featured
articles
6 Tips for Those Who are Not Called to a Consacrated Life
You wanted to be a priest but the Lord put you in the Friendzone? 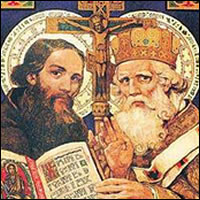 For those who don’t know the concept, the friendzone it's a symbolic place sent to those who, after having courted someone (and although there were signs of "something else"), they suddenly see how all the possibilities are closed, because the other person wants them "only as friends". Jokes are made on the Internet about it, and even those men who manage to circumvent that first slam in the nose are considered almost heroes, for having conquered and won the heart of the lover. In Church environments, we laughed when that girl who was open to gallantry and conquest tells us: “I want you in the love of Jesus" or "I love you in Christ"; a deadly phrase for all in love to which it is clear that the only affection I could aspire to is a fraternal relationship of siblings, as Christians and as Jesus teaches us to do so.

But it also happens on the plane of the spiritual, especially the vocational. I say it from the front row, but also as a witness to many friends of mine, who have made a process of discernment to consecrated life, vocational days and have even begun their training in seminars, convents and houses of formation for life Consecrated... After a few months and even years, they realize that God loves them, seeks them, desires them, but as laymen, not as husbands consecrated in the manner of priests and religious.

It's a hard subject, especially because often we don’t do well our job of welcoming back those who return, who do not always find fit in the communities. Many times, embarrassed by the situation and the pompous farewell of their groups and parishes, they must return to the routine and rethink the vocation, now as laymen. To them, whom the Lord himself has sent to the Friendzone, and also to us that we are part of communities of where vocations are born and to where return some that had bad aim, we dedicate these lines to them, not as manual but like Pastoral Orientations and loving welcome to this reality.

1. You will Always be a chosen one

All, lay and consecrated, we are chosen. We all have a vocation and we’re all loved by God, but many times the voice of God is confused between the words of impulse and encouragement that arise from our own heart and our desires, from the desires of the communities that from among their ranks are vocations and those who accompany the processes of discernment often see their empty training houses and institutional pressure pushes them into the capture of new vocations every year.

2. No silly questions, there are fools only those who don’t ask them

I don’t want to sound all consciousness, but many young people approach me with this concern, to begin or not a process of vocational discernment. I'm sure several of them are afraid, for many would be a "can if the lord tells them who wants them for him full-time, as consecrated". To avoid the risk of being called really by God, avoid looking at the sky and ask the vocation question to the Creator. I always encourage everyone to give themselves a time and a serious space of direct vocational questions with the "boss", for many assume that they were created to be husbands, wives, and children; be professional and form a nice family. In fact, many open up to the possibility that one of their children will be called by God for consecrated life (even if they don’t even have a girlfriend and obviously don’t think of marrying yet), but for them the matter seems completely ruled out.

Is healthy to ask, as realistically, statistically speaking, God calls most of his children to be secular and unconsecrated. If it were, otherwise, we'd be extinct as a human race. And that happens on both sides of the coin: there are consecrated who evidently had a vocation to marriage, and husbands and wives who evidently had a vocation to consecrated life. It is not to make a judgement about your personal choices, but therefore, to prevent possible "marksmanship errors" when making important decisions such as getting married, it is a good idea to discern well, ask yourself the vocational question seriously and not avoid it out of fear to receive a "yes" from God. Maybe they never asked the vocational question seriously and at this point it's late; so, they are mediocre fathers and mothers and pastoral agents with a great sense of guilt for leaving their families abandoned while they do their apostolates.

It's different to discern wrong than to make a mistake. When you make an error, what you do is you choose evil instead of good. Instead, when one is making discernment is more complicated, because among the options on the table there are no bad things, but there are good things and better things.  Discerning well is not choosing between good and bad, only a fool would choose the bad. Discerning is choosing between the good and the best. That's why it's not always as clear as we'd like. Therefore, if you had a bad aim, you should know that you are going in a good direction, pointing to the correct direction, only that you did not fill in the target. It is not healthy to succumb to the temptation of feeling unsuccessful, mistaken or meaningless.

Our communities of faith must be spaces that help us to discern and to embrace us when we have not been successful one hundred percent, for that is the spiritual life, of taking risks following the divine master.

4. Shame is natural, but don’t stop because of it

Is logical that those who have spent some months or years in their formation as religious, then feel overwhelmed by the situation of having to return. Especially when all the masses were praying for your vocation and even the last old lady in your parish knew about you and looked forward to the moment of your ordination or your vows. Without doubt that pressure that, without wanting and with love, we endorse our communities, is many times the reason that causes some to give the fight for longer, postponing the inevitable. Is courageous to recognize when it has not been well discerned, when in the light of prayer and of the councils of the greatest one decides to return home, to reassemble the life and to rethink the vocation. Therefore, although shame is a feeling that expose uncontrollably, try not to take hold of you and keep you isolated, away from all and making you live your faith alone.

5. The Universal Call to Holiness

We are all called to be saints. But the way that holiness is lived is something else. Perhaps the confusion occurs because most of the saints we know are consecrated: priests and religious who founded recognized congregations and orders present throughout the world and whose spiritual legacy has been of great blessing to the Church. On the other hand, it’s less frequent to find stamps of saints in whose impression is the face of a teacher, a mother or a mechanic automotive (although there are!). That statistically is not so common, doesn’t mean that they don’t exist. From our spiritual path of laity committed to the Church we have the same and even more possibilities of attaining holiness, doing what touches us, that which the Lord has entrusted to us, provided we do it with love, faith, the hand of the Church and seeking God's will.

6. All vocations are discerned

I have seen that some friends of mine, who even had a girlfriend or boyfriend as appropriate, in the midst of that relationship feel called by God and today are in their paths of formation to consecrated life. To have found that according to you is the indicated, it’s not necessarily an unmistakable sign of a vocation to marriage and family. Surely is difficult to have to tell your girlfriend: "My love, this weekend we won’t be seeing each other because I will go to vocational days". It sounds almost like going to meet with another lover (although in this case is another, Jesus).

That's why it's important to discern everything, don’t give anything for assumed, because the vocation of being a layman, is not by discard or because you didn’t leave elected for something better, is a vocation like all, in which one feels called to a particular mission and in which the Lord also asks to deliver life completely, giving up everything and hugging to it as the center of one's life.