Yes, we can contemplate and believe at the same time, because "we were born for bigger things." 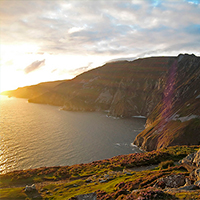 Yes, we can contemplate and believe at the same time, because "we were born for bigger things."
By: Luis Fernando Hernández, L. C. | Source: http://www.regnumchristi.org/Magazine In-Forme no 51

The swimmer Diana Nyad astonished a journalist who did not understand how she could marvel at nature and humanity without believing in God. Michael Shermer, the founder of The Skeptics Society, commented on the fact: "This is the subtle intolerance, - says Shermer referring to the journalist – of those who are unable to conceive how one can marvel without believing in supernatural causes of astonishment. Why should she think so? "

In this short article we will address the issue that Shermer did not deal with in his article ("Can an atheist marvel at the universe?"), that is, how is it possible that the wonders of the world lead to think of something or someone beyond?

The texts of some ancient writers will help us to understand this great issue that goes beyond all the technological advances of today. Technology is not everything: if it were everything, there would be no more sightseeing to see exotic or simply inspiring places.

In the dialogue On the nature of the gods, Cicero puts in the mouth of Balbo, one of the characters, a series of arguments on how we know the existence of the gods. To satisfy curiosity, we summarize them as: the first is because we can know some things in the future; the second, for the continuous climatic changes; the third, for the abundance and quality of the goods of the land; and the fourth, by the order and constancy we see in the universe (cf. Cicero, De Natura Deorum II, 13-15; III, 16).

But Balbo decides to put aside his more logical arguments and begins to speak as it follows (we recommend psyching up according to that time):

"Leaving aside the complexity of the discussion, we can somehow contemplate with our eyes the beauty of the things we have said that were formed by the divine providence. To begin, let’s contemplate all the earth placed in the midst of the universe, round and compact everywhere in itself by gravity; lined with flowers, herbs, trees, fruits, whose incredible number is distinguished by an endless variety. Add to all this the permanent cold state of the sources, the sparkling flow of the rivers, the so green trappings of the riverbanks, the deepening and concavity of the caves, the roughness of the stones, the heights of the great mountains and the vastness of the fields; [...].

And, how much is the beauty of the sea! What a beauty of the world, how much and variety of islands, what a grace of beaches and shores! How many genders and what disparate animals swim or live underwater or rotate or adhere to the hulls of the boats! [...]. There remains the complex of the remote and distant sky of our dwellings, that all covers and encompasses, [...] in which with gigantic fascination the forms of fire trace the ordered races. From which is the sun, whose size far exceeds the earth, travels around it; and coming out and taking place the day and night [...].

In the same space the stars, which we call errant [the constellations], revolve around the earth and in the same way they come out and put themselves, and their translation movement sometimes accelerates, sometimes it is lentic; many times they also stop, nothing can be more admirable, more beautiful than this spectacle! (De Natura Deorum, II, 98-104 excerpt). "

In the description that Balbo makes of the wonders of the universe, it must be noted the exuberance and variety of vocabulary, which is not casual. What Cicero wants to achieve is to reflect with the same text the reality of what he puts together: the universe contains a vast variety of beings. That is why the description goes from the closest thing to the furthest to us so that we notice this wonderful diversity.

Let's go back to the core of our article. Balbo has been arguing before in different ways. What's more, these are his last words before he made the already mentioned description (De Natura Deorum II, 96-97):

"But our spirits become a routine because of the daily bustle and the custom of the eyes and they are no longer admired or questioned by the causes of things they always see, whence it turns out that it is almost the novelty that must awaken us to seek the causes more than the greatness of reality. Who would call 'human ' whom, seeing the so precise movements of the sky, the order of the stars being so coordinated with each other and reconciled, deny that there is in them any cause and proclaim that all this happens by chance? Or when we see that something moves with a certain mechanism, like a sphere or a clock or many other things, we hesitate that they are works of reason? And when we see that the impulse of the sky moves with incredible speed and revolves persistently fulfill its annual displacement with great balance and preservation of all things, perhaps we doubt that not only these things are done for a reason, but also by the excellent divine reason? "

In this last paragraph the logical motives of Balbo excel: if there is order in the universe, there must be someone who has established it. In the first text, Balbo makes us see the wonders and the beauty of our world, but without concluding anything in particular. Balbo would cast in the face of Shermer who does not believe the ability of authentic wonder and the reference to God at the same time possible. For Shermer, the people who marvel are divided into two: those who are prone to astonishment and do not associate it with any being; and those that are not, because they immediately refer the wonder to an external cause to them.

Nowadays it's harder to ask these questions. It is easy to see that we prefer to capture a photograph of the moment than to contemplate nature, art or any other marvel directly with our eyes.

The questions we have asked deserve an answer because they are an everyday subject. The gadgets with which we take pictures or make videos will stop being popular. Nature, however, will always be there and our questions too.

The description that Cicero drew up through Balbo lasted in the later Christian tradition. And this type of description is found, for example, in Minucius Félix (Octavius, chap. 17), Saint Augustine (De Civitae Dei, XXII, 24; Enarrationes in Ps., 41, 7) and during the Middle Ages in the Franciscan Thomas of York (Sapientiale, Lib. VII, C. 10, 8-16).

We take the example of the text of St. Augustine in the City of God:

"What kind of discourse can conceive the beauty and value of creation that divine generosity granted to man to contemplate and take care of it, despite being thrown into these works and miseries, and having been condemned? In the so varied and changing beauty of heaven, land and sea; in the sun, the moon and the stars; in the shadows of the forests, in the colors and fragrances of the values, in the diversity and number of birds that sing and are full of colors; in the various species of so many admirable animals, among which are more worthy of admiration those who have smaller dimension (indeed, we marvel at the constructions of ants and bees rather than the immense mass of whales); also in the great spectacle of the sea, when you dress with so diverse dresses and colors [...]. With how much pleasure the sea is contemplated when it is stirred and then the calm becomes greater because in this way it gives pleasure to the one who contemplates it, as long as it does not throw and hit the one who sails! "

The texts we have quoted give us some clues to understand how natural beauty and transcendence can have a common point. In both texts, a pagan and a Christian, marvels appear as the spectator's attitude, the diversity of nature, the minimum nuances that we find in it; and man's ability to see both the wonderfully great and the surprisingly small: the ants and the stars of the universe. Ovid said: "and while the other animals look down on the earth, [God] gave the man a sublime vision and ordered him to look at the sky and erect his face to the stars." Yes, we can contemplate and believe at the same time, because "we were born for bigger things."