Featured
articles
Beauty in the time of the social networks
The context in which today the question of beauty arises poses a new challenge for all those who wish to offer an answer. 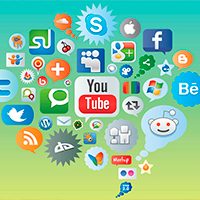 Beauty in the time of the social networks
The context in which today the question of beauty arises poses a new challenge for all those who wish to offer an answer.

The context in which today the question of beauty arises is a new challenge for anyone who wants to offer an answer. Already the same question implies to know to whom we direct it: to a digital native or a digital immigrant? The second is still able to remember that there was a time when the internet was not what permeated everything while the first was born with digital under the arm.

The digital revolution has also meant a mental reform and a different way of approaching problems. That's the case we're dealing with. While the digital immigrant has entered in relation to the world through the environment of physical interrelation, the digital native has done it through the environment of virtual interaction. In this way, one can expect that the answer of the first points to a conception of beauty different from the one that can have the second.

What every subject understands and perceives as beautiful and judges as such has an objective and a subjective dimension. The objective dimension can be based on royalties from social and/or cultural conventions (often supported by speculative disquisitions of not little value), whereas the second redirects rather to a perception that is well collected in the famous expression of “in taste nothing is written. “ Both, in any case, point to the experiential but under different modalities: for the digital immigrant or for which it is not even supposed moments of contemplation, reflection, and discernment while for the digital native implies interaction.

Let's take another step and go from the subject who perceives the beautiful to the place where beauty is captured and contemplated: is the Internet as it is known today a space for the expression of beauty? The initial response seems to be a resounding "yes": art, privileged channel of the beautiful, also exists on the web not as a mere migration from traditional art to the Internet (art online) but as an authentic new way of expressing wit human (on line art). Internet is presented, then, as a new great gallery to appreciate the beauty but also to capture it. This goes hand in hand with appealing to consider programs and other resources as true tools of artistic creation: if in the past the brush or the chisel were the instruments to materialize what the artist had inside, today the mouse seems to be the software, hardware and other technological gadgets that facilitate the creation of online art.

Naturally, these considerations do not suppose that anything should be considered art and less an accomplished and therefore beautiful execution. What, then, is the specific aspect of beauty on the web?

The speed with which materials are shared and valued in social networks offers an indication that lets us see what is what in many cases is understood by truth on the web: in the perception of many is true the most popular, what is most discussed or forwarded. Being that the truth is intimately linked to beauty is not strange that it also happens to be considered in the light of popularity. And is this what reduces beauty at the time of social networks?

Before venturing an answer, consider the artist as well. The interaction offers the artist a direct and immediate contact with those people interested in their creations but it can also become conditional on their creation if they do not have the maturity that makes them able to pass unscathed in the temptation of the popularity which would be nothing but the impairment of ingenuity itself.

The consideration of beauty in the 21st century is also done in the light of the digital and everything that digital implies, especially in relation to the way of thinking. The binomial beauty-internet, therefore, carries a new pedagogical challenge: teach to appreciate the beautiful, both the physical-material and the on line art, is put as a challenge. This is a challenge that is not only limited to digital natives but even to the one who creates online art, which is intended to open up the field in a new context. This challenge also aims not to reduce the theme of beauty to mere mass interactions.