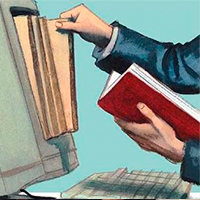 Humanities, sciences, technologies: is rebirth passed through the internet?

The Spanish edition of Forbes magazine published in its digital version an article which enunciated the most demanded works for the future: genetics, environmental engineering, engineering of the software, food science, psychology and mental health, computer security, translators and interpreters, computer engineering and civil engineering (these will be the 10 most demanded jobs in the future, 06.05.2014). Only in a second way could one of these careers be related to the humanities and practically the majority with the sciences and, above all, with the technologies.

That the humanities do not go through their best time is not a novelty. In the American Union-where, the offer is still more or less alive-the race of humanities accounts for only 7% of the university students in the country, which is equivalent to half of those enrolled in 1970. Data from 2013 refer that only 15% of Stanford University students are enrolled in one of the programs of the 11 departments of humanities that has that house of higher studies. In the last decade the careers that say relationship with the humanities have fallen by 20% at Harvard University. If this is the state of the great universities it can be assumed that of the small ones.

The current state of the humanities is part of the text of an ancient conflict: the emergence of positive science in the late eighteenth century led little by little to relegate the non-empirical knowledge, rather discursive-rational, which had permeated until then. Since science was profiled as practical knowledge and the humanities are associated with a purely theoretical form of knowing, the contrast between scientists and humanists meant a sort of apologetics struggle that, in the end, in fact, they won the first. As science provided not only material «tests» but also immediate results translated into social benefits, it was understandable that it was also done with the public favor.

Seeing the utility, soon the universities – historically born by the push of the humanities –focused on privileging research programs that were multiplying disciplines in increasingly concrete sectors of positive science. Thus were born the prolific scientific specializations that touch the most unsuspected nooks of the experimental and that the governments and new patrons also saw as places of investment in more recent times.

The advent and development of technology – the origins of which date back to the Industrial Revolution – meant a field of application in which science could not only say what was possible to do but also to carry it out. But what was initially an alliance between science and technology soon became servility.

Being that technology is today marked by the internet, it is understandable that the World Wide Web is the environment in which the humanities have found a field of work and, so to speak, of revitalization.

It was the year 2009 when the idea of the "digital humanities" arose at the convention of the Modern Language Association (MLA). Almost simultaneously the Office of Digital Humanities was born, promoted by The National Endowment for the Humanities in the United States.

What are «digital humanities»? Being a nascent discipline there is still no common agreement. The printed and digital literature point in two directions: a minimum-list and another maximalist. According to the first one, it would consist in the simple application and incorporation of the informatics to the humanistic studies; according to the second, it would be a paradigm shift in the way of thinking the culture itself.
There indeed are those who have seen in all this more a danger than a response to the promotion of the classical humanities: can technology supply the specific task of the human mind? Do humanities change for the simple fact of being able to access a book from a screen? What if the literati, historians, philosophers, and artists are not interested in learning the languages of computer science? How to ensure respect for individual genius in an environment where the forms of authority are perceived from the prism of the popularity and the "collective brains" Wikipedia-style?

In part the approaches of authors such as McGann have justification: a machine can "read" 20000 poems and yield results according to the objective for which they were subjected to "reading", but the machine does not generate new ideas or can supply the exercise of thought and capture of values that are only capable of making the mind and the human spirit. But there are no less than two valid questions in a world where digital natives are becoming more and more: are today's students able to concentrate on just one thing? Is a young man able to read in more than 140 characters of twitter without losing the thread of the speech? The answers can also determine what is meant by « digital humanities» in the maximalist sense.

This particular trait of the humanities is especially appreciated among businessmen when it comes to giving a job. A report by the Association of American Colleges and Universities ("Employers More Interested in Critical Thinking and Problem Solving than College Major") shows that businessmen consider education in liberal arts (humanities) at the time of contacting a person, although his specific training is that of a technician (51% considers it very important, 43% very important and 6% not important). The report cited says that people with humanities studies have better listen out empathy and assessment of the context of management.

The exaltation of science and technology as practical fields cannot forget the also practical consequences of the deterioration of humanities such as the impoverishment of thought, the loss of cultural awareness, the growing lack of critical judgment and the coming to less than aesthetic perception. The humanities are mental experiences provoked by works of art and history; these are the ones that broaden the understanding of reality. Being the experience of thought what constitutes the substance of the humanities seems reductive and counterproductive not to value their specific contribution. In short, today what is in crisis is not so much the humanistic knowledge or scientific knowledge but the knowledge in itself. The «places» where this is manifested are only the symptoms.

Sciences and humanities have different fields of research and methods that mutually illuminate the technological. This diversity is presented as interdisciplinary and as well as complementarity: as an integrative thinking challenge that cannot forget the way many know and relate today: the web.

Ultimately it is not a strategy to bring the humanities into the top ten of the careers of the future or return to the unsuccessful debate of hierarchical primacy but to make the humanities not be seen as elitist, as a bourgeois knowledge that after all has no use. That in general, the political and social landscape promotes a dialogue of height, of an inability to see the beauty and of a lack of greater creativity, is in close relation with this loss of the humanities. In the book of Metaphysics, Aristotle said that men naturally tend to knowledge. And the humanities are part of that knowledge that also makes sense. That this sense is today more or less linked to the internet is precisely what we will be witnessing in the coming decades.