It is urgent for Christians to be aware of the importance that the Church has always given to the problems posed by social, political and economic reality. 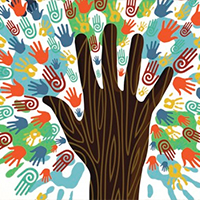 It is urgent for Christians to be aware of the importance that the Church has always given to the problems posed by social, political and economic reality.
By: Miguel Angel Serrano Perea | Source: Catholic.net

Christians must be aware of the importance that the Church has always given to the problems posed by the social, political and economic reality.

The Church is said to have a "social doctrine." But what does society have to do with faith? Can we say that the Church has social and political interference?

In the face of the thousand forms that this question could cover, it would be good to go back to some basic questions that make the relationship between Church and society, faith and culture, gospel and history. These questions are not sociological but theological. But they necessarily lead to the field of social sciences, which are those that tell us and interpret the things that happen.

There are those who identify the "social doctrine" with the documents that in the last hundred and thirty years-from Leo XIII to Francis-the popes have dedicated to the social question. Identification is not erroneous but insufficient.

It is necessary to say that the Church has always had social-related teaching, or better, the social always was part of its message. That teaching-which can be traced in the same gospels, which recognizes very important antecedents in the Old Testament, which occupied the minds and hearts of the fathers of the Church and which was explained in authors of the stature of Saint Thomas and Bartholomew -has been expressed in the last century in a more systematic doctrinal body driven prophetically by the magisterium of the popes.

Let’s deepen on it.

The life of the Church and every believer unfolds at a crossroads: that of history and faith. The Church is, by the grace of God, that part of the human happening that, explicitly and consciously, opens up to the Kingdom of God mysteriously present in him.

Hence everything that makes man's life the Church considers it not as an additive but as something intrinsic to its concern and its evangelizing mission.

If there is a religion that cannot afford to alienate itself from history, that is the Christian religion, who daily professes faith in a God who "made himself flesh and put his tent among us" (Jn 1, 14), shared our weakness and made his salvation present in the midst of the avatars of our history. For a Christian, alienating from history is giving up "half a creed."

Hence the concern for the social, the economic and the political is not the "whim" of some Christians with "social inclinations." It is part of the integral mission of the Church. To make this explicit, throughout the encyclical Evangelii Nuntiandi Pope Paul VI, every time he referred to "evangelization," he added: "liberation and human promotion."

The Gospel, which does not leave Christians indifferent before the problems of the time in which they live, is the one who encourages reflection and commitment. This reflection and this commitment were crystallized, over the years, in a cluster of "principles of reflection, norms of judgment and guidelines of action" (Paulo VI, Octogessima adveniens, n º 4) that we know today with the name of Social Doctrine of the Church.

It is necessary to emphasize the dynamic nature of this doctrine. It does not constitute a closed body of truths by the mere fact of being an expression of faith in constant dialogue with the challenges that come from reality:

The social teaching of the Church was born from the encounter of the evangelical message and its demands with the problems that arise from the life of society (Congregation for the doctrine of the faith, instruction on human freedom and liberation "Libertatis Conscientia", n º 72).

Implying faith and history is the reason why the privileged subjects of the social teaching of the Church are the Christian communities themselves. In tune with the image of the Church as communion of particular churches emanating from the Second Vatican Council, Paulo VI affirms:

It is up to the Christian communities to analyze with objectivity the situation of their country, to clarify it by the light of the unalterable word of the Gospel, to deduce principles of reflection, norms of judgment and guidelines of action (...) To these communities it is a matter of discerning, with the help of the Holy Spirit, in communion with the responsible bishops, in dialogue with the other Christian brothers and all the men of goodwill, the options and commitments that should be taken to carry out the social, political and economic transformations that are urgently needed in each case (Apostolic Letter Octogessima Adveniens, No. 4).

Analyze, clarify, deduce, discern, assume, perform... Community reflection and action are intertwined shaping thought and praxis that does not pretend to be a "third position" among the great ideologies of the modern world but rather an instance of permanent confrontation with the social reality trying to indicate an overcoming horizon of the realizations-and limitations-of the human happening. In 1987, John Paul II expressed it quite clearly:

The social doctrine of the Church is therefore not a "third way" between liberal capitalism and Marxist collectivism, and not even a possible alternative to other solutions that are less radically counterposed, but which has its category. (...) It does not belong to the sphere of ideology, but theology and especially moral theology (Encyclical Letter Sollicitudo Rei Socialis, n º 41).

3. The church and politics

All this, however, may not silence the fundamental question: what does the Church has to do with politics? In this sense, are illuminating the words of the document of the III General Conference of the Latin American Episcopate held in Puebla, México, in 1979:

Two concepts of politics and political commitment must be distinguished: first, politics in its broadest sense that looks at the common good, both nationally and internationally. It is up to it to specify the fundamental values of every community... It also defines the means and the ethics of social relations. In this broad sense, politics is of interest to the Church and therefore to its pastors, the ministers of unity. It is a way of giving worship to the one God, desacralizing and at the same time consecrating the world to Him (LG 34) (Document of Puebla, n º 521).

Secondly, the concrete realization of this fundamental political task is normally done through groups of citizens who intend to achieve and exercise political power to resolve economic, political and social issues according to their criteria or ideologies. In this sense, we can talk about “party politics”. (...) no more inspired political party in the doctrine of the Church can assume the representation of all the faithful, because their concrete program will never have an absolute value for all. Partisan politics is the own field of the laics (Document of PUEBLA, n º 523-524).

The action of the Church is political as it looks at the common good of society (first sense), beyond how its members are positioned at the time of the options-partisan-concrete (second sense).

That is why it can be said that it does not exist-as sometimes it is proclaimed-the apolitical, although yes the non-partisan. Word and silence, action or omissions have, then, a political repercussion beyond the explicit intentions of its protagonists.

Here are some of the most important documents presented by the Social Doctrine of the Church: