Featured
articles
Judas and the personification of evil
The novel gives us an exercise of imagination, historical recreation, and psychological and spiritual depth.

Judas and the personification of evil 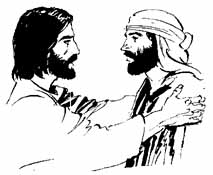 The novel gives us an exercise of imagination, historical recreation, and psychological and spiritual depth.


Italo Calvino affirms that the classics are texts that one discovers in the opportune moments and that they remain for us to read them and to be surprised with the certainties they enclose.

It is no less than the discovery of a contemporary work of universal heights which presents us deep questions for our existence. Such is the case of Judas of Lanza del Vasto. A book that can hardly be found in bookstores or specialized portals, but that would be worth recovering.

The novel gives us an exercise of imagination, historical recreation, and psychological and spiritual depth. Lanza Del Vasto, a man of social work and deep Christian faith, is in charge to show us that the human being is much more complex than one could think of a stereotyped and infertile reductionism.

As the title indicates, the central character is Judas, the traitorous apostle of Christ. While there have been efforts of interpretation and biblical narratives concerning Jesus Christ, St. Paul or St. Luke, some memorable and others frankly unfortunate, seldom has seen in so much detail the lattice of the heart and the mind of the outlawed apostle.

From the inner voice, the novel shows a man who is an example of evil. Not for nothing, Dante places him in the most hidden circles of Hell in his Divine Comedy to be devoured by Satan along with other traitors in an infinite cycle. But this evil that Lanza Del Vasto shows has such human nuances; it is so realistic, that it forces us to enter into the mystery of redemption.

Judas, the traitor, was also human. And as such, the dimensions of his person are put at stake to dictate why he turned in his Master. Judas is a fundamental part of the history of Salvation. It was in God's plan. But it cannot be seen as a product of fate, as if it were part of the Greek mindset for those who had no escape.

The Traitor disciple decides he is free. He chooses evil. He is not a puppet. He is a man of flesh and blood that tends to evil, who lives the misfortune of choice, the tragedy of freedom. Page after page, Judas twists his way despite his potential for good. He turns his back on conversion.

He is the enthusiastic apostle, but he pretends and ignores everything and he forgives nothing. Envy, pride, lust, all the deadly sins create that act of ignorance. He doesn't see who he hurts, he doesn't understand. And if he acts well at some point, it's only by appearance, not by genuine conviction. He does well in the form, but not in the background. Therefore, in the last temptation, he does not stop his fall.

A man of mirrors, of speeches, of unsubstantiated volunteerism, Judas is the traitor who embodies all evils. He is not the evil in itself, he is its execution. With this, we understand that the human person is not bad, but that their actions are those that must be cared for. And Judas never did, because he was just pretending.

Lanza Del Vasto writes all the sins and condenses them into one person. Like when Jesus wrote in the sand the sins of those who wanted to stone the adulteress woman. For this reason, in spite of the evil done, of the relevance of the fact, the condemnation of us to a man is outlawed, despite the mean and vile.

Judas leads himself to condemnation. And so we can see in this novel that describes elements that we may have never thought of in the relationship he maintained with Jesus, the apostles, women, and children who were protagonists of those historical years of mankind. Judas then is the interlocutor with the people who brought to the end the redemption in Galilee.

The book leaves a mark. It reminds us of the sense of human fragility that Pope Francis speaks of and invites us to think about our freedom, about our existential decisions, about our responsibility for the other.

This book is worth it. A work published by Editorial Jus within the collection Christian Classics and that gives us a letter with commentaries of the philosopher Jacques Maritain and a punctual introduction of the poet, philosopher and activist Javier Sicilia. The high-level translation was carried out by the first wife of the great Argentinean writer Julio Cortázar, Aurora Bernárdez.

In resume: work to be inhabited, a classic that redefines us, an essential text for Christian and non-Christian readers. It is a space to continue wondering what to do with the evil that surrounds us, that haunts us and that is shown to us day by day. An evil, then, that can only be overcome by the experience of martyrdom and Christian love. The path which, by the way, was not taken by Judas nor by many men throughout history.