Father Hurtado knew the experiences that were given with the participation of members of the Church in the working class, which encouraged him to restart work in the social field. 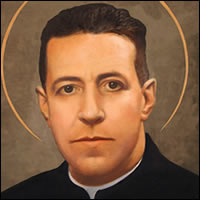 Father Hurtado knew the experiences that were given with the participation of members of the Church in the working class, which encouraged him to restart work in the social field.
By: José Gómez Cerda | Source: Catholic.net

ALBERTO HURTADO was born in Chile in 1901. He had an integral training, studying at the Seminary. In his youth, he joined the Conservative Party, in which he militated together with other young people who would later form "The Phalanx" a political movement composed of humanists, which emerged as a division of the Conservative Party.

Hurtado continued his studies abroad, disengaging from his partisan activities, dedicating himself to religious studies, ordering himself as a Jesuit priest; he elaborated his thesis on "Home Work".

In 1934, Cardinal Pacelli (who would later be Pope Pius XII) sent a letter to the Chilean church, responding to the question of whether Catholics should act in a single political party.

That document of Cardinal Pacelli was widely disseminated and became known as the official position of the church in the face of politics. Among other things it said:

"A political party, although it proposes to inspire itself in the doctrine of the Church and to defend its rights, cannot assume the representation of all the faithful, since its concrete program will never have an absolute value for all"

"It is clear that the Church could not be linked to the activity of a party, without compromising its supernatural character, and the universality of its mission."

"It must be left to the faithful the freedom which is their responsibility as citizens to constitute political and military groups in them, provided that they give sufficient guarantees of respect to the rights of the Church and of the souls."

FIRST SOCIAL WORKS OF HURTADO.
Alberto Hurtado had his first contacts with social Catholicism in BELGIUM, where he studied at Leuven University. There he pervaded the theoretical knowledge of the social issue and the movement of the working class.

His thesis at the University of Belgium was on: Dewey's Pedagogical System in the face of the Demands of Catholic Doctrine.
On his return to Chile, in 1936, he published a pamphlet entitled The Crisis of Priests in Chile. Then he wrote, Chile, a Catholic country?

Before, Father Godin had alarmed the French Catholics with his book France, Country of Mission, with data, figures, and numbers so convincing on the religious situation in Paris, that they motivated the formation of Mission of Paris, creator of the labor priests.

In 1938 the political movement "The Phalanx" was created, composed of young Christians, with social concerns, which was a detachment of the conservative party.

In December 1944, Alberto Hurtado founded the House of Christ, a house of lodging, where the indigent could go to eat and sleep, needy and miserable, who had no place to live. This is one of the great social works of Father Hurtado, which was spread across various regions, providing services to thousands of humble and marginalized people.

Another of Hurtado's first social activities was to be an advisor of the Catholic Action of Chile, to which he was dedicated for several years until he was replaced in 1945.

In 1946 Father Hurtado went to Mexico, from where he marched to Costa Rica to meet Monsignor Sanabria; Father Benjamin Núñez, who had organized around 75 Christian unions in a movement called "Rerum Novarum". This meeting served as an inspiration for his social work with the workers. Being 45 years old, he wanted to start a new stage of his life with the working class.

Monsignor Sanabria was the counselor of Father Benjamin Núñez, creator of the Costa Rican Confederation of Labor "Rerum Novarum", who in August 1943 began a labor union movement, developing a Christian ideological tendency, organizing mainly workers of the banana plantations of Costa Rica.

In that meeting with Monsignor Sanabria, he said to Father Hurtado: "social work must be done on the basis of the dissemination of their social encyclicals, of their philosophical, social, political and historical ideas and their historical pictures. They're real atomic bombs. Our duty is to preach them. "

It is from that meeting in 1946 when Father Hurtado received a new influence, this time direct, practical and realistic.

In Latin America, other experiences were being given in the field of social work of the Church with the workers. For example; the formation of the Union of Workers of Colombia-UWC, where a group of Jesuit priests had a great influence, led by Father Vicente Andrade, and young workers organized in the Catholic Action.

The UWC of Colombia initially had its main force in Antioch, but in a short time, it came to have as many affiliates as the Confederation of Colombian Workers-CTC, created in 1936 and directed at that time by communists, socialists, and anarchosyndicalist.

The UWC was very dynamic in its action until the rise to the power of the dictator Rojas Pinilla, who pretended to use the trade unionism for his political advantage.

Father Hurtado knew the experiences that were given with the participation of members of the Church in the working class; this encouraged him to restart work in the social field.

In September 1947, a book by Alberto Hurtado titled SOCIAL HUMANISM was published, it is a work that reflects his sermons and teachings in recent years, it can be said to be a testament to his social thinking.

"Politics has a social function and precisely because the politicians are more highly placed, because they have a directive work, of they must come to the country the example of private and public morality, honesty, sobriety of life, example of work, consecration to social welfare. "

In this book Father Hurtado tries to relate doctrinal aspects to social practice; it goes directly towards the responsibility of the politicians, of the public men who are in the management and the power of the government.

"In the face of the evil of the world, the Christian is a perpetual and total nonconformist, and at the same time a realistic man who does as much as circumstances allow him, knowing that the worst of cowardice is the evasion of action."

"The word work should suggest to all of you, not just a means to earn a living, but a social partnership."

"Society lives for the work of its citizens. Without work there would be no wealth or society. This idea could be better understood if the worker, ceasing to be a mere employee, participated in the property, and even of the direction, of the work in which he works. »

At the end of 1947, father Alberto Hurtado traveled to Spain, from where he went to France, especially to know the movement that Father Joseph Lebret had formed «Economy and Humanism». It was a movement aimed to seek social reforms, basing his work on surveys and social monographs. They were inspired by the Integral Humanism of Jacques Maritain.
Hurtado also participated in a congress of the Jesuits and was learning a new experience in France: The Worker Priests, who lived, worked and held economically as the other workers.

He met Father Voillaume, and the followers of Charles de Foucauld "The Little Brothers of Jesus" In that trip he also knew the Christian renewal that was lived in France in the postwar times, which motivated Gilbert Cesbron to write "The Saints go to Hell", and to Voillaume «In the Heart of the Masses».

"The Saints go to Hell", is a testament of the French worker priests, presented by Cesbron in the genre of novel, with a deep social sense.

This novel presents Father Peter, a working priest, living in the same conditions of the working class, despite the slanders he wanted to defend, and the distrust of those around him. Involved in a struggle of social classes, it explains the dechristianization of the majority of the workers.

In 1948, after returning from Europe, within an internal conflict of the Chilean Catholic hierarchy, to support a candidate of The Phalanx, Father Hurtado announced in the magazine Ercilia, his intention to create a Central Union, based on the Chilean Trade Union Action- CTUA.

The Archbishop of Santiago de Chile appointed him as an advisory chaplain to the CTUA, to bring the ideological aspect directly, based on social encyclicals.

CTUA was a para-union movement, which means that it did not have directly affiliated unions, but rather workers who were members of various trade union organizations.

Chile's labor laws allowed only one union in each industrial branch. Para-trade unionism is a way of influencing and maintaining ideological tendencies within one or more unions, without reaching the direct affiliation of the trade union organization.

Catholics came very late to labor unionism in Chile, compared to socialists, communists, and anarchosyndicalist, who had ideological tendencies, with a great history of struggle in labor unionism; as happened in almost every country in Latin America.

The CTUA was developed as an independent workers' organization, created its newspaper titled Union Tribune, had a training program for its militants, a team of highly capable advisors and technicians, and maintained a position always in defense of the interests of the working class; although it never became a majority organization, but it represented a humanist tendency and promoter of Union Actions.

Father Hurtado, as an advisor to the CTUA, had a direct contact with the Chilean working class, dedicated a lot of time to organize courses, study circles, lectures and be a spiritual counselor of his principal executives.

Hurtado had several activities, as he served as:

In 1949 the book by Father Hurtado titled: What is Social Christianity? was published, with the subtitle The Christian Social Order in the Documents of the Catholic Hierarchy; which is a compilation of the social encyclicals and the pastoral letters of the Chilean bishops on the social issue.

In 1950 his book "Labor Unionism: History, Theory, and Practice" was published where he states:

“Today's society recognizes man as equal in political rights, but often denies his spiritual freedom, the basis of all democracy, and even more what constitutes economic democracy, that is, opportunities for him to prepare, educate himself, act as a free and responsible man. "

In October 1951 the first issue of the magazine "MESSAGE" appeared, of which its founder and director was Alberto Hurtado. It was his last works of apostolate at the service of the social question.

“MESSAGE " is the answer to a question of a Christian man of our times, who feels disoriented and anguished, to rediscover the full meaning of his life. The Message magazine has been one of the most impactful works for the orientation of social Christians in Latin America.

That same year the Worker Priests, of the Order of the Brothers of Foucauld, promoted by Father Hurtado, also began to work in Chile so that the church had a living and active presence in the world of work.

“The class warfare is a fact; it is enough to open your eyes to see the permanent conflict between those who have economic and financial power and those who have only a modest salary.

On August 18, 1952, Father Alberto Hurtado died. His work endures in all the social aspects of Chile and many Latin Americans have seen in him a man who gave himself completely to the social issue.

Beatification and Sanctification of Alberto Hurtado

On October 16, 1994, Pope John Paul II in St. Peter's Square, Vatican City beatified Father Alberto Hurtado. The celebration was attended by thousands of Chileans, led by the president of Chile, Eduardo Frei, and the presidents of the legislative chambers.

Father Hurtado was declared a saint of the Catholic Church in a solemn mass celebrated by Benedict XVI in St. Peter's Square on October 23, 2005.