Featured
articles
Interiority and Encounter in the Confessions of St. Augustine
What is man? Who am I?

Man always before God, God always present in Man. Saint Augustine has sought to give an answer to this two-dimensional question by man not in a treatise of philosophy but in a spiritual work: the Confessions. 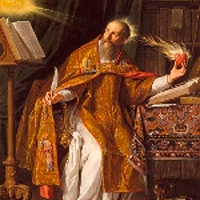 Interiority and Encounter in the Confessions of St. Augustine
What is man? Who am I?

Pretending to investigate and write about men has been and remains one of the most daring and at the same time most important companies in Philosophy. One of the most daring companies because it proposes as an object a completely peculiar and complex reality: absolutely close — the investigator is the object itself — and at the same time deeply mysterious; one of the most important companies because the results to which it arrives depend in good part of the personal and social approach of the human life.

This double social and personal character of anthropology must be emphasized. The question it seeks to answer is always posed with two faces: what is man, who am I? Its answer seeks to be valid for all men — and that is why every culture and social system has at its base a certain conception of man — but it is at the same time an answer for each man — that it must be, therefore, given "in first person" — as it is an expression of this search for the very identity present in every human heart and from which each one raises the horizon of his own life.

Saint Augustine has sought to answer this two-dimensional question by mn enot in a treatise of philosophy but in a spiritual work: the Confessions. There will be those who hastily object that the study of a spiritual work is not the work of a philosopher, but the objection seems banal to us when it depends on a conception of philosophy that excludes a priori a dimension of reality that in the case of man is essential, namely, their relationship with the Absolute. We venture to say that perhaps St. Augustine would have also ruled out such an objection as meaningless. No one better than him knew to acknowledge in philosophy a true love for wisdom, open to the whole of the real and guided by that passion for the truth that leads him to proclaim in a moment of his life: «Lose everything and leave all these vain and empty things and let´s give ourselves to the sole investigation of the truth!’

Confessing to God his own life, St. Augustine has left to us a deep essay about the man in which the two faces of the above-mentioned anthropology are conserved with an existential freshness seldom rarely exceeded. We believe that investigating this aspect of inner life as Saint Augustine conceives; can give a contribution to the anthropology of our days, which seems to forget, with tragic consequences, the deepest identity of the human being.

Man and God: the theological anthropology of St. Augustine.

Anyone who has read with a little attention the Confessions of St. Augustine will not be able to deny that he is an "expert in himself". Deep analysis, rich descriptions, locked arguments, heartfelt prayers, are going on in this kind of landscape of human life, showing the ability — speculative and existential — of its author to come into contact with the human.

However, let us take a step back to observe the fundamental structure of confessions the key to Augustinian Anthropology: man before God. The man who searching himself and his happiness seeks God and finding God finds himself. It could be said that here we glimpse the fundamental "situation" from which any research on human beings and their reality parts for St. Augustine.

This shows us at the same time two fundamental traits of his anthropology, which can be considered two traits of his thought: his acute realism and his deep existential character. As Copleston rightly points out: «the Augustinian attitude has on its side the advantage that it always contemplates man just as he is, to man in particular, because de facto man has only one ultimate purpose, a supernatural purpose, and, as far as his present existence, it is not but fallen and redeemed man: it has never been, nor is, nor will be, a mere "natural man," without an end and a supernatural vocation.”

"Because you have made us for you and our heart is restless until it rests in you."

In these few words that Augustine directs to God at the beginning of the Confessions, we find densely summarized the essence of the Augustinian Anthropology. They express first of all the experience of "restlessness" of the human heart to the reality that surrounds him, pointing out that opening to the infinite that characterizes man as for man. And not only that, but they also show the reason for this concern: being the man created by God to "rest" in Him. St. Augustine — teaches John Paul II by recalling this passage — "see man as a tension towards God." Just as Romano Guardini points out: "the existence of man has the form of" towards-God "and" from-God "... Man can, briefly, be understood only just starting from God, existing and performing only by the work of God. "

Certainly, these coordinates are not detrimental to the other dimensions of human life-the others, oneself, the world-, but they constitute the point of reference from which all the Augustinian vision of man is ordained.

This existential situation of man, which constitutes Augustine's response to two of the fundamental questions of every human being: where do I come from? Where do I go? It also illuminates the essential reality of the human being (who am I?), thus allowing man's access to the meaning of his existence.

Thus, for the Bishop of Hippona, the essence of man is his being "image of God." Treating the highest in the human being in De Trinitate, St. Augustine recalls that "it is his image [of God] as long as he is capable of God and can partake of God." Beyond the specific conclusions of this monumental work, it results emblematic the very attempt of St. Augustine: "exercise" our weak understanding to get as close as possible to the mystery of the Holy Trinity through the understanding of its image more perfect in this world, human nature. We go into the image to understand the Model, but we distort the image if we lose sight that it is always from the Original.

Jacques Maritain, from his perspective, gives some light on this intimate union in Augustinian thought: «by experiencing God mystically, the soul also experiences, in the most hidden retreat of his sanctified activity, its nature of spirit. This double experience, produced under the special inspiration of the Spirit of God and by his gifts, is like the supernatural finishing of the self-inversion movement of every spirit. She is, in everything concerning God and the soul, the center of gravitation of the doctrines of St. Augustine. If we lose sight of it, the deep sense of these doctrines vanishes»(9).

God and Man. Man always before God, God always present in man. Only from this "theology" of human existence, it is possible to understand the depth of Augustinian Interiority.

Interiority and encounter in the Confessions of St. Augustine